The Crypt of the Sepulchral Lamp in the Catacombs of Paris. Image Credit: Wikipedia

The Catacombs of Paris are a series of underground ossuaries that run for about 280km, or 170 miles.  The anonymous bones of the Catacombs are comingled in intricate patterns to form walls, columns, and artistic sculptures.  All of the bones from this monument came from local cemeteries in the 18th and 19th centuries.

The area in and around Paris has been permanently occupied since the Roman era.  When Paris was part of the Roman Empire, people buried their dead on the outskirts of the city.  Parisians changed to internments in consecrated burial grounds within the city after the rise of Christianity.

Cimetière des Innocents, or the Cemetery of the Innocents, was the oldest of these church graveyards.  The corpses from eighteen parishes, two hospitals, and the city morgue were all buried here.  By the 14th century, charneling on cemetery grounds became necessary because of the high density of bodies.  Eventually corpses were stacked on top of each other for meters underground and others had to be interred in mass graves.

The problem became so bad in the 18th century, after ten centuries of burials and decay, that bodies could no longer skeletonize in the soil.  Many of the corpses saponified, fatty tissue turned into a soap-like substance,  or putrified in huge holes, producing a rotting smell.  The historic cemetery became a source of disease and infection.

In 1763 Louis XV issued an edict forbidding all burials inside the city.  Then in 1786 a city commission decided to exhume the graves from the city’s graveyards and store the bones in the abandoned quarries beneath the capital, starting with the the Cemetery of the Innocents. 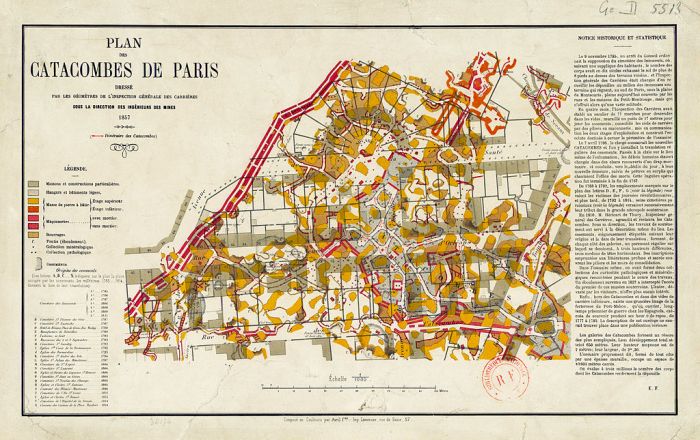 Plan of the visitable Catacombes, drawn by the IGC (Inspection Générale des Carrières) in 1858. Image from Wikipedia.

On April 7th 1786, a part of the tunnel system was consecrated and the long process of transferring the bones to the deserted mine was started.  The remains were moved by processions at night in black-draped carts and wagons that were led by chanting clergy.  After fifteen months, all of the bones from the Cemetery of Innocents were interned in the Catacombs.  The project was so successful that city officials repeated this effort with other local burial grounds.

The remains were left piled in unorganized heaps until 1810, when Napoleon authorized the General Inspector of the Quarries, Héricart de Thury, to renovate the Catacombs and organize the bones.  De Thury had the workers build artistic facades made of skulls and long bones behind which piles of the remaining bones were placed.  The final transfer of the bones took place in 1859 and the catacombs were finally finished early in the 1860’s.

Bones from the former Magdeleine cemetery (La Ville Leveque Street numbers 1 and 2). Deposited in 1844 in the western ossuary (bone repository) and transferred to the catacombs in September 1859. Image from Wikipedia.

The Crypt of the Sepulchral Lamp and the Rotonde des Tibias are some of the Catacomb’s most famous skull-ptures.  The Crypt of the Sepulchral Lamp, the first monument built in the catacombs, is in the Place de Saint-Laurent where the bones from the Saint-Laurent Cemetery were arranged.  The Sepulchral Lamp was originally used by the quarrymen for light and airflow but de Thury kept it as a centerpiece for this chamber.  The Rotonde des Tibias is a huge column constructed out of skulls, tibiae, and femora is in the final section of the walking tour.

There are over 200 entrances to the Catacombs because of its history as a mine, but there is only one “official” entrance, located at 1, avenue du Colonel Henri Rol-Tanguy – 75014 Paris.  Because there is too many entry points for security to monitor at all times, people are able to sneak in regularly.

Image of the bone facades in the Paris Catacombs and piles of bones behind them. Image credit: Ken and Nyetta on Flickr.

The cavers who illegally explore the Catacombs are called cataphiles.  These people spends hundreds and thousands of hours down in the intricate cave system, some become so familiar with the tunnels that they don’t need maps.  Many of these urban explorers are dedicated filmmakers, artists, and writers with good intentions, but there are a few people who sneak in and are destructive.  In fact, the Catacombs have been shut down a few times over the years because of vandalism.

The Catacombs are open daily from 10am to 5pm, except Mondays and public holidays. But get there early because wait times are estimated to between three and four hours.