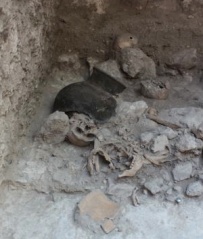 Researchers of the Department of Anthropology of the Americas at the University of Bonn, excavating in Mexico, have discovered a mass grave containing 24 people.  The mass grave is located in an artificial cave in the Maya city of Uxul, which had been used as a water reservoir.  The clay on the floor of the cave preserved the bones so well that the archaeologists were able to identify the age and sex of 15 of the 24 individuals, which include 13 men and two women between the ages of 18 and 42.  The research team believes that they died about 1400 years ago.

There are signs of a violent death for a majority of the skeletons interred in the grave.  Cut and chops marks on the bones indicate that these individuals were decapitated and dismembered and were either prisoners of war or nobles from Uxul itself.  “The discovery of the mass grave proves that the dismemberment of prisoners of war and opponents often represented in Maya art was in fact practiced”, says Prof. Dr. Nikolai Grube.

Nicolaus Seefeld, another archaeologist working on the site says the hatchet marks on the neck (cervical) vertebra suggests decapitation. An unhealed skull fracture on the forehead of another skull (consistent with blunt force trauma) was probably caused by a cudgel.  Other skulls show signs of cutting with sharp objects, which may have been caused by stone hatchets.

Many of the bones from skeletons were not articulated.  All of the skulls were scattered around the cave, many with their lower jaws (mandible) missing, and far from the rest of the bodies.  Analyses of teeth and bones showed that several of the deceased suffered from malnutrition and had lost several teeth to tooth decay.

A medieval mass grave has been found near the Durham Cathedral in the UK.