Home › Archaeology › Why does the Atacama skeleton look like an alien but is actually human?

Why does the Atacama skeleton look like an alien but is actually human? 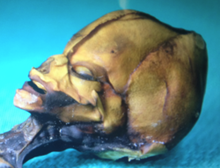 This bizarre little 6-inch skeleton was found in a pouch in the Atacama Desert in Chile in 2003.  Almost immediately the skeleton, nicknamed ‘Ata’ for the desert in which it was found, sparked the imaginations of people around the world and the theories of what it was ranged from mummified fetus to ancient alien child.

In 2012, when Garry Nolan, professor of microbiology and immunology at Stanford School of Medicine, heard that the skeleton was going to be the subject of a documentary he reached out the filmmakers and offered to examine the remains.

According to Nolan’s research, Ata’s skeletal abnormalities include the presence of 10 ribs instead of the normal 12, underdevelopment of the mid-face and jaw, and misshapen skull. Ata’s x-rays revealed skeletal development consistent with a child between 6 and 8 years old, despite it being the same size as a 22 week-old fetus.  HuffPo has a good collection collection of x-rays and other pictures of the Atacama skeleton.

Despite what you may have heard on Ancient Aliens, the Atacama skeleton is neither ancient nor alien.  Nolan’s DNA tests revealed that the skeleton is human, its mother was from the Chilean area of South America, and the remains are likely only a few decades old.  The reason for the skeletal abnormalities remain a mystery, but are likely due to a congenital birth defect. Currently Nolan is continuing the tests to find signs of mutations that could have caused these deformities.  The possibilities include: dwarfism, progeria (a rapid aging disease), or turricephaly (a birth defect that causes the skull to be cone-shaped).

The Atacama skeleton is a great reason why physical anthropologists and archaeologists study congenital diseases, or diseases present at birth. Congenital diseases that affect the skull and skeleton can deform bones so bad that they could be confused with nonhuman remains.  This knowledge is useful for archaeologists to prevent them from misidentifying the bones…and it helps to debunk those ancient alien theories that cause rage screams.

Below are some examples of congenital birth defects that have shown up in the archaeological record.

Like Loading...
‹ 4000 Year-Old Irish bog body is the oldest, probably suffered a violent death
Skeletons recovered from a Studebaker in South Dakota, may belong to missing teens ›