The German mummy found in an attic is not 100% real 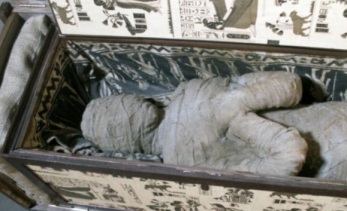 Photo via Daily Mail, of the fake German mummy in its sarcophagus.

In Germany last August, a little boy playing in his grandmother’s attic found a mummy in a sarcophagus.  Forensic experts at Hamburg’s Eppendorf University Hospital examined the mummy to determine its age and origin, and they’ve determined that most of the mummy’s bones are not real.

When scientists unwrapped it, they were able to determine pretty quickly that this is a fake, a really bad fake.  Scientists discovered that the mummy contained a real human skull, but the rest of the skeleton (postcranial) is made of plastic.  An unidentified substance was sprayed on the plastic skeleton that made the bones look real, and caused the confusion over its authenticity.  The arrow that was lodged in the eye orbit was part of a child’s toy.

Did the Ancient Egyptians Leave Mummies in England?

Like Loading...
‹ Skeletons recovered from a Studebaker in South Dakota, may belong to missing teens
Update #1: Police say finding cause/manner of death from the skeletal remains found in Studebaker will be challenging. ›