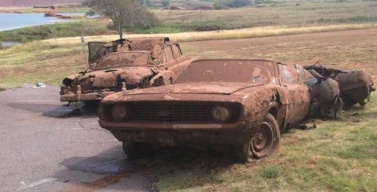 Photo from Newson6.com of 2 cars recovered from the lake; the 1969 Camaro is in the foreground

Sky News is reporting that one of two cars pulled from Foss Lake two weeks ago, a 1969 Camaro carrying 3 teenagers, shows signs that it was involved in an accident.  Damage to the radiator fan, a motor mount, and the fuel pump caused by the impact when it hit the water suggests that the car was running when it hit the water.  Investigators believe the Camaro contains the remains of three teenagers who went missing from the Sayre area in November of 1970.   Right now the police  believe that the teenagers were “driving faster than they should have,” and they don’t believe any foul play was involved.

The two vehicles were discovered while state troopers were testing sonar equipment in Foss Lake in September.  A 1950s Chevrolet was also recovered from the Lake, which had another three bodies inside. Police believe this car was rolled into the lake, and 2 of the 3 bodies inside the Chevy belonged to a couple who went missing in 1960.

YouTube Video of the recovery via the Mirror News

Like Loading...
‹ Why do the bones of a wealthy medieval family show signs of malnutrition?
The skull cave of Fiji ›