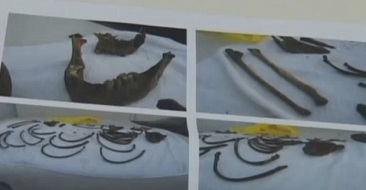 Photo via the DailyMail of the remains suspected to belong to Doris Anne Wood.

In Kentucky on Thursday, a father and son purchased the contents of a storage unit at an auction, after the owner died earlier this year.  As the tweo were inspecting the unit they discovered dirt covered human bones inside three yellow grocery bags.

Authorities believe the the bones belong to Doris Anne Wood, a Delaware woman who has been missing since July of 1997.    Wood was married to Robert A. Wood, who died in May at an Alabama hospital at age 59.  Robert Wood moved from Kentucky to Alabama in 2004, but continued to pay rent on the storage unit his death.

The owner of the storage facility employed Robert Wood around the time his wife went missing, and told officials that everyone suspected Robert killed his wife.  Police questioned Wood at the time of his wife’s disappearance, but he was never charged.  Investigators say the condition of the remains suggests that they were buried at some point and later dug up.  The bones have been taken to the medical examiner for further analysis.

Update on Remains Found in Storage Unit in Kentucky