Beheadings, stakes, and stones – A list of infamous ‘vampire’ burials 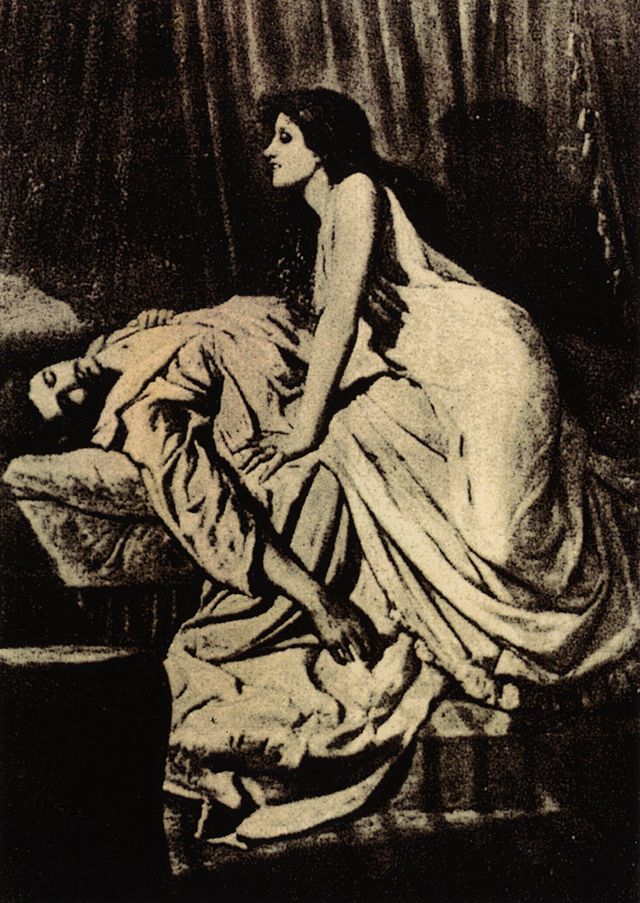 The origins of the vampire legend can be traced to ancient Egypt and Greece.  But in Europe, between 1300 and 1700, there were a series of plagues that helped to cultivate the belief in vampires due mainly to misconceptions about the  stages of decomposition.  When gravediggers reopened tombs and mass burials to add new bodies during the plagues, they would sometimes come across bodies bloated by gas, with hair and nails still growing, and blood seeping from their mouths and believe them to be still alive.

People believed that vampires spread illnesses, such as tuberculosis and plague, in order to suck the remaining life from corpses.  So when a suspected vampire died, society had specific ways of preventing that person from rising from the grave.  This usually involved beheading the corpse, inserting objects into the mouth, or impaling the body before burial, or in some cases exhuming the grave of a suspected vampire and dismembering the corpse

Beheaded Vampires of Connecticut and Poland

When I think about the setting of a vampire story, New England doesn’t come to mind right away.  But it turns out the New England had a well known vampire panic in the eighteenth century, that say many graves exhumed and bodies mutilated.  These graves are still being unearthed.  In 1990, children playing near a gravel mine in Griswold, CT found a lost colonial-era farm cemetery, that with 29 burials from the 1700s and early 1800s.  Burial number 4 of this cemetery held the remains of a red-painted coffin.  The skeleton inside had been beheaded, with the skull and thighbones laying on the ribs and vertebrae.  Subsequent analysis showed that the beheading, along with other injuries, including rib fractures, occurred roughly five years after death, by somebody had also smashed the coffin.

Vampire burial found near the town of Gilwice, Poland. One of our skeletons found buried with their heads between their legs. Image Credit: The History Blog

In July of 2013, Polish archaeologists unearthed the remains of four beheaded skeletons near the town of Gliwice at a construction site.  The heads of these individuals were either removed during execution or during a bizarre burial ritual.  At the time of internment, each head was placed between the legs of the deceased.

When these four bodies were unearthed, speculation followed that these were suspected vampires, and decapitation was used to prevent them from rising from their graves.  However, other newspaper reports noted that an alternative theory suggested they were not vampires, but victims of an execution at a nearby gallows.

The team of archaeologists and historians working on this site were unsure how and when these individuals died because no personal items or grave goods were found with the bones to help estimate their age.   But initial estimates suggest the bones date back to the 16th century. 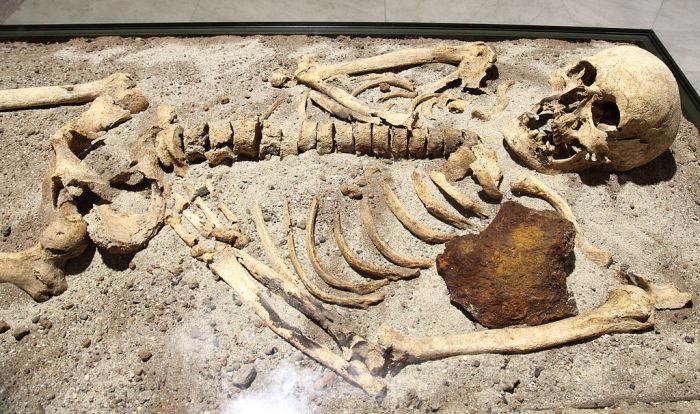 Bulgaria has traditions of dealing with vampire internments that date to the 10th century.  Archaeologists have discovered skeletons with bound hands or pinned down with metal rings or metal rods, and graves covered in heavy stones.

In 2012 a skeletons, believed to be around 800 years old, was unearthed during an excavation near a monastery in the Bulgarian Black Sea town of Sozopol.   This grave contained a body that was pierced through the chest with iron rods.  Archaeologists later identified this person as Krivich, a pirate who lived in the 14th century.

Then in 2013, archaeologists working on Bulgaria’s Perperikon site found the 700 year old grave, belonging to a male, about 35 to 40 years of age, who was impaled with a ploughshare through left side of his chest.  Archaeologists date the grave to the 13th or 14th century using coins found in the grave, but this date is presumptive without confirmation from other testing like radiocarbon dating.

These two discoveries become known as the “Twin Vampires of Sozopol.”

Last month (October of 2014), Bulgarian archaeologists discovered a grave containing a skeleton with a stake driven through its chest while excavating the ancient town of Perperikon.  The grave is thought to date to the 13th century and contains the body of a man who had a ploughshare driven through his body and had his left leg removed before he was buried.

The Spiked Vampire of Lesbos

In 1994, the skeleton of a middle-aged man was found (pictured here) in a 19th-century Turkish cemetery on the Greek island of Lesbos.   The man had eight inch iron spikes nailed through his neck, pelvis, and ankle.  Researchers from the University of British Columbia and the Tenth Ephoreia of Prehistoric and Classical Antiquities discovered the skeleton in a stone-lined crypt hollowed out of an ancient city wall.  The archaeologists working at the site believe that the body was almost certainly that of a Muslim, and is believed to be the first time a corpse of a person other than a Christian had been found treated in this fashion.

Skull of the 16th century Venetian “vampire” found with a stone in her mouth. Image Credit: Daily Mail

In 2006, Matteo Borrini, a forensic archaeologist from the University of Florence, excavated a mass grave on the small island of Lazzaretto Nuovo, in the Venice lagoon, which is linked to the Venetian plague of 1576 that killed as many as 50,000 people.  Two quarantine stations were established to keep the diseased and the potentially diseased away from the living, the Lazzaretto Vecchio (Old Quarantine) and Lazzaretto Nuovo (New Quarantine).  In a mass grave on Lazzaretto Nuovo, Borrini found a skeleton belonging to an elderly woman, whose jaw had been forced open by a brick.

The forensic odontologist determined the woman’s age by examining her teeth with an advanced digital x-ray technology.  The results showed that the woman was between 61 and 71 years old when she died, which is shocking because women didn’t reach this advanced age in the 16th century.  In medieval Europe, many people believed the devil gave witches magical powers, including the ability to cheat death.  This means that such a relatively old woman may have been accused in life of being a witch, and was labeled a vampire after she died.

In 2012 physical anthropologist Simona Minozzi disputed these claims and told the Huffington Post that the remains of this woman were surrounded by bricks and stones, and any one of these could have fallen into her mouth as the her mouth fell open during decomposition and the grave settled.   In Borrini’s defense, there were graves like this found in Ireland.

Like Loading...
‹ The tomb of the ‘Dark Countess’ exhumed to solve 200-year-old mystery
The search continues for victims of the 1922 Herrin Massacre ›