Photo via MailOnline of a boy walking pasts unclaimed bones in a common grave.  Click here to see photo.

The Christian holiday of All Saints‘ Day falls on November 1, followed by All Souls’ Day and Day of the Dead on November 2.  ‘All Saints Day’ can be traced back to the Roman era and the pagan festival of Lemuria, when the spirits of the dead were appeased in an elaborate feast.  According to Ovid, the tradition began when Romulus attempted to appease the spirit of Remus, his deceased twin brother. This festival was Christianized in 609 when Pope Boniface IV consecrated the Pantheon in Rome to the Blessed Virgin and the martyrs, and was originally celebrated on May 13th.  The feast of All Saints was moved to November 1st to celebrate the prayer room (oratory) in St. Peter’s for the relics “of the holy apostles and of all saints, martyrs and confessors, of all the just made perfect who are at rest throughout the world” built by Pope Gregory III (731-741).  Though this holy day was originally meant to celebrate Catholic martyrs and saints, it has become a day for people to honor their ancestors.  Across the globe, people visit the graves of their relatives, where they place floral arrangements and candles, and say a prayer.

Because the Philippines has Asia’s biggest Catholic population, All Saints’ Day has become one of the two most important days of the year.  People gather in cemeteries to pray, clean and decorate family graves with candles, flowers and food.  Entire families will often keep vigil overnight at tombs to keep the dead company, where they will eat, listen to music, and play to pass the time. 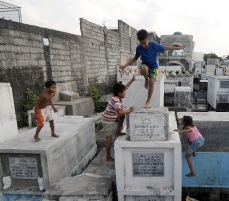 The Manila South Cemetery, one of Manila’s largest cemeteries, expects so many people in the next few days that cemetery officials have arranged free wifi service for visitors.  They have also set up a data center for visitors with laptops so that workers can direct people to their loved ones’ grave.  The Manila South Cemetery is expects about 500,000 visitors in the coming days.

The photos below are from the Manila North Cemetery, the largest cemetery in the metro area of Manila, which is expecting over a million visitors during All Saints Day and All Souls Day.   This graveyard was originally just home to its caretakers, but is now home to about 10,000 living Filipinos year around.  The poor population grew in the cemetery when they could no longer afford the cost of housing in the Manila area, that is when impoverished residents moved into their family crypts.  If a family doesn’t have enough money to buy a family crypt or grave,  their family member is buried at the edge of the cemetery and exhumed after five years, and the bones are stacked in charnel houses and common graves.  In cases like these, where unclaimed skulls and skeletons are placed in common graves, mourners will place flowers and toys among the bones during All Saints Day.  Right now there are about 1,000 police officers patrolling the Manila North Cemetery, and first aid tents have been set up to help visitors cope with the heat.

Read more and see more photos at the MailOnline

Strange Remains: The River of Bones in London

Strange Remains: Human Sacrifice at a Viking Funeral – The Tale of the Headless Norse Slaves

Tags: Day of the Dead