In 2007 and 2008 artist Damien Hirst became notorious for casting two human skulls in platinum and setting them with diamonds to make a statement on the inevitability of death and the vulgarity of materialism.

In 2007 Hirst created “For the Love of God,” a $100 million diamond-encrusted cast of an adult skull.  This became the world’s most expensive contemporary artwork and the largest diamond piece since the commissioning of the Crown Jewels.

If the first skull was shocking because of its Liberace-levels of extravagance, the second piece was unsettling because Hirst used an infant’s skull.  In 2008, Hirst created “For Heaven’s Sake,” an infant’s skull cast in platinum and studded with pink and white diamonds.  The work angered parenting groups, and upset those that suffered the loss of a child.  Though Hirst and the gallery acknowledged the “delicate nature” of the subject, they believed that because the skull belonged to an old pathology collection it would be less contentious.

Below are the details of each piece along with details of the skull that was used for the cast.

Photo via Wikipedia, ”For the Love of God”, sculpture by Damien Hirst, platinum cast of a human skull covered with 8,601 diamonds. Copyright Damien Hirst.

Damien Hirst: For the Love of God, 2007, platinum and diamonds 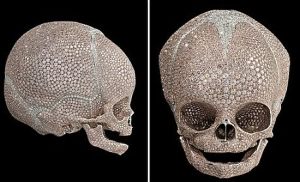 Like Loading...
‹ Historians unearth the graves of Herrin Massacre victims
The cast of the crucified body of an executed murderer ›