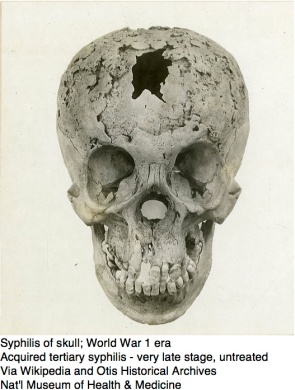 Syphilis is a sexually transmitted disease caused by bacteria, Treponema palladium, and was first described during the Siege of Naples in 1495.   It has three stages: primary, secondary, and tertiary. It’s during the tertiary stage, or the final stage, that bones are damaged and take on a swollen, “moth-eaten” appearance. Tertiary syphilitic lesions begin to appear 2 to 10 years after infection, and attack the cranium and tibia causing disintegration or the thickened formation of new bone.

In the 1940’s, cases of syphilis started decreasing rapidly after the widespread availability of penicillin, an inexpensive antibiotic. 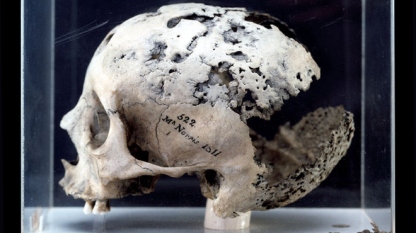 Syphilitic skull on display at the Hunterian Museum in London. 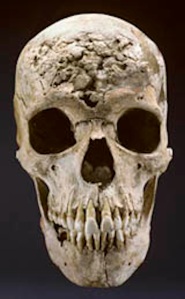 Skull of a male with extensive destruction from late-stage syphilis. Image courtesy of: Smithsonian Institution

Like Loading...
‹ Body of unidentified teenager exhumed in Florida to help solve a cold case from 1972
Skeleton crew found inside the wreckage of WWII-era Nazi U-boat ›