Home › Archaeology › The 14th century Temple of the Skulls at Tehuacan

The 14th century Temple of the Skulls at Tehuacan

The Temple of Skulls is located in Tehuacán in Puebla, Mexico, and was built by the Popoloca people in the 14th century.  Archaeologists from Mexico’s National Institute of Anthropology and History dubbed it the Temple of the Skulls because of the two niches in the north and west walls, each containing four femurs and a human skull held in place with stucco.   They believe the temple was dedicated to the Mictlantecuhtli , the Lord of the Dead, because one of the skulls had traces of red paint on its mouth, which resembles an image of Mictlantecuhtli in the Codex Borgia.  Archaeologists also unearthed an effigy of the god and two ceramic heads on top of the temple mound.  More than 300 pieces of human remains were recovered at the site suggesting that sacrifices were performed there. 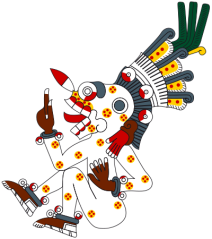 Picture via of Wikipedia of Mictlantecuhtli from the Codex Borgia

Ramon Lopez Valenzuela, head of the excavation in Tehuacan, said they discovered the temple during the 2012 field season.  The Temple of the Skulls is at the level before the final construction phase of Tehuacan, indicating that it was built in the mid-fourteenth century.  Tehuacán was conquered by the Aztecs in 1456.

Strange Remains: 1200 pieces of bone were found in the basement of a house rented by this Founding Father

Like Loading...
‹ Skeleton crew found inside the wreckage of WWII-era Nazi U-boat
Discovery of mass graves in Mexico underscores the continuing violence in the region and problems identifying the dead ›