The skeleton of Elizabeth Brownrigg, displayed in a niche at
Credit: Wellcome Library, London.

By all accounts, Elizabeth Browrigg (1720-1767) was a respected midwife who was married to a painter and led a normal middle-class life…until she went all American Horror Story.

Because of her status in her community, The London Foundling Hospital gave Elizabeth custody of several female children as apprentice domestic servants.  But Elizabeth soon proved to be an abusive employer who routinely chained her charges to wooden beams, beat and whipped them, starved them, and made them sleep in a coal closet.  When two of her charges couldn’t take anymore, they ran back to the Foundling Hospital for help.  But one servant, Mary Clifford, died from the infections she got from her wounds.

Elizabeth Brownrigg was tried and convicted for murdering Mary Clifford and was hanged at Tyburn on September 13th 1767.   After her execution, Elizabeth’s body was publicly dissected and her skeleton was displayed  in a niche at the Royal College of Surgeons, so “that the heinousness of her cruelty might make the more lasting impression on the minds of the spectators.” 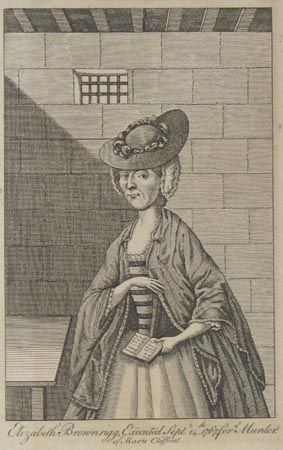 An engraving of Elizabeth Brownrigg; from Murderpedia

Photo via the National Library of Medicine. The pamphlet from Elizabeth’s execution

The Skull of Mary Magdalene

The cast of the crucified body of James Legg, a murderer executed in 1801