This is a pretty awesome idea for an engagement or wedding announcement.

Ayako Kanda and Hayashi Mayuka took couples portraits to another level for their senior thesis exhibition at Musashino Art University, which recently won the Mitsubishi Chemical Junior Designer Award. For the project, the artists photographed four couples, using a CT scans and x-ray machines, in various entwined positions. When Kanda and Mayuka strip their subjects of their flesh and individual identities, the passion and tenderness they share as lovers emerges and is symbolized by the enduring nature of their bones.

“X-ray images usually show the finite nature of our bodies composed only of matter,” say the duo. “But these couples portraits reveal a pulse that isn’t normally seen.”

This goes to show that sometimes there is no parting even in death.

I can’t help but wonder if the artists weren’t inspired by these recent archaeological finds. The feelings that they inspire are strikingly similar.

Archaeologists excavating a graveyard near a monastery in Cluj-Napoca, Romania discovered the grave of a man and a woman buried together, and positioned so that they are facing each other and holding hands. The team believes the man may have died in an accident, because his sternum (chest bone) was broken by a blow from a blunt object, but they have not been able to find a reason for the woman’s death. The couple is estimated to have died after 1450, when the monastery was built, but before 1550, when the graveyard was secularized.

Photo via NBC News of a Roman couple holding hands discovered in October 2011.

Italian archaeologists unearthed the grave of this Roman-era couple in October of 2011, and believe the man and woman were buried at the same time between the 5th and 6th century A.D. in central-northern Italy. The woman is wearing a bronze ring and appears to be gazing at her male partner. Donato Labate, the director of the excavation told Discovery News, “We believe that they were originally buried with their faces staring into each other. The position of the man’s vertebrae suggests that his head rolled after death.” 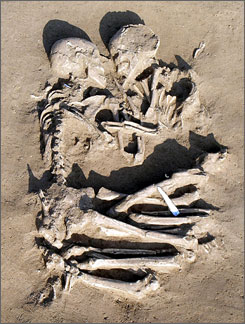 In 2007, archaeologists excavated a grave containing two skeletons, between 5,000 and 6,000 years old, outside of Mantua, in the village of Valdaro, Italy. They are believed to be a man and a woman who died young and were buried together. This type of grave is unique for the period because double burials are rare, much less graves with bodies positioned in this way. The media dubbed them the “Lovers of Valdaro,” even Romeo and Juliet because of the grave’s proximity to Mantua, the setting for Shakespeare’s famous play by the same name.

You can see more of the portraits from the exhibition at Spoon & Tomago.

Like Loading...
‹ A medieval mass grave has been found near the Durham Cathedral in the UK.
The skull of Mary Magdalene ›