Home › History › The human bones scattered around this spooky forest may outnumber the trees.

The human bones scattered around this spooky forest may outnumber the trees. 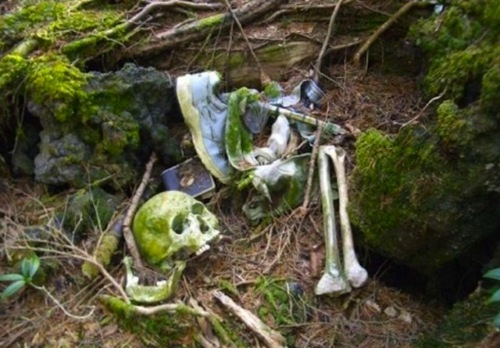 The Aokigahara Forest, nicknamed the Sea of Trees, is located at the base of Mount Fuji in Japan and is one of the most popular places in the world to commit suicide. It’s appeal as a suicide destination spot is due in part to its isolation, lack of wildlife, and impenetrable foliage. Scattered around the vegetation and undergrowth hikers can see abandoned campsites, old photos, and bones still in tattered clothing-remnants of past macabre pilgrimages.

According to the World Health Organization, the suicide rate in Japan in 2011 was 19.8 per 100,000 people, one of the highest among developed nations, second only to South Korea, and almost double that of the United States. Authorities believe that the uptick in suicides is related to the economic downturn, with people resorting to taking their own lives amid the shame of joblessness and crushing debt.

Japan’s high suicide rates and present day acceptance of suicide is directly associated with a tradition of honorable suicide that dates to its feudal era. The feudal era was a time when samurai warriors would commit seppuku (or “stomach-cutting”) a ritual self-disemboweling. This tradition was part of the samurai honor code and was a way of preventing capture by the enemy or used as a form of capital punishment.

Suicide in the Aokigahara Forest was popularized in Seicho Matsumoto’s 1961 novel “Nami no To” (“Tower of Waves”), in which the heroine, goes into the Aokigahara Forest to end her life after she becomes involved in a socially unacceptable relationship. Since then, this forest has been the final destination in many suicidal journeys. In 2004, the suicide rate in the Aokigahara Forest reached a record number of 108 people. Police records show that in 2010 there were 247 suicide attempts with 54 people succeeding.

Things have gotten so bad that police and local fireman coordinate monthly sweeps to recover people in various states of consciousness and to gather human remains. In 2011 local authorities found about 100 people who were in the process of taking their lives in various ways. If the search teams get there too late, forest workers must collect the decomposing bodies and carry them down to the local station, where they are stored in a special room used specifically to house suicide corpses. But the forest is so vast and the foliage is so thick that body can lie undetected for years.

Japanese spiritualists believe that the suicides committed in the forest have saturated the trees with negative energy that produces paranormal activity and prevents others who enter from leaving. They believe it’s bad luck for the ghosts of the suicide victims if their bodies are left to decompose in the forest, and it’s said that their spirits can be heard screaming at night and their cadavers will move on their own.

Now there is sign at the entrance with contacts details for the Suicide Prevention Association that reads: ‘Your life is a precious gift from your parents. Please think about your parents, siblings and children. Don’t keep it to yourself. Talk about your troubles.’

Brennan, Lyle. (2012, April 9). The suicide forest of Japan: Mount Fuji beauty spot where up to 100 bodies are found every year. MailOnline. Retrieved on January 3, 2014 from: http://www.dailymail.co.uk

Strange Remains: Manna from the bones of Saint Nicholas will cure what ails you

Strange Remains: The Thanksgiving of 1610 in Jamestown was a celebration of the end of the “Starving Time” and probably cannibalism

Like Loading...
‹ The lost remains of the mysterious Pedro Mountain mummy
Archaeologists believe the bones found in an Edinburgh garden may belong to the victims of body snatchers ›