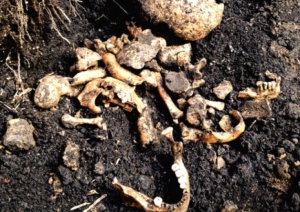 Photograph by Greg Macvean, via The Scotsman. Some of the human remains recovered from the Edinburgh townhouse.  Click here to see full size pic.

In September 2012 construction workers renovating a townhouse in Edinburgh made a gruesome discovery in the garden…human bones in a shallow grave.  According to The Scotsman, researchers now think it’s likely these remains may belong to the unfortunate victims of body snatchers.

Archaeologists unearthed about 60 bones, belonging to four adults and at least one juvenile, and many of the bones have tiny holes consistent with wires used to articulate anatomical specimens.  According to the tests conducted by Historic Scotland and Guard Archaeology, these remains date to the early 19th century, an era when body snatchers were stealing corpses and selling them to the university and the private medical schools around Surgeons’ Square in Edinburgh.

Prior to The Anatomy Act of 1832, medical schools in England and Scotland could only dissect the bodies of executed criminals, they were not allowed to used donated cadavers.  Since demand exceeded supply, anatomy teachers had to resort to doing business with seedy body snatchers to fill the need.   Body snatchers, or resurrectionists, would steal corpses from recent burials and sell them to medical schools.  William Burke and William Hare, the most infamous body snatchers, murdered 16 people in Edinburgh in 1828, and sold their victims’ bodies to an anatomy instructor at the medical school in Edinburgh.  It’s not likely these bones belong to any of their victims because it’s believed all the bodies of Burke and Hare’s victims are accounted for.

The one thing that is stumping the archaeologists is why the bodies were buried in the garden.

John Lawson, from the Edinburgh City Council Archaeology Service, who was the first to examine the remains on site, told The Scotsman, “It is a very good question and one which we haven’t been able to answer.  It is possible that, given the fact they may have been acquired illegally, that someone should wish to bury them, or it could have been as simple as a house clearance. We will probably never know for sure.  What we do know is that these were used to train the surgeons of the future and are a relic of our heritage, of that early stage of modern medicine.”

A similar bone pit was found in the basement of a house Benjamin Franklin rented while he lived in London between 1757 and 1775.  In all archaeologists found the remains of more than 15 people, the scraps of a secret anatomy school run by William Hewson, a close friend of Franklin’s.   When Hewson was done with the bodies, rather than sneak the bodies out for disposal and risk getting caught and prosecuted, since this was before the Anatomy Act, he buried whatever was left in the basement.  There’s no evidence that an anatomy school was run out of this townhouse in Edinburgh, but a past tenant may have been connected to one somehow.

Maureen Kilpatrick, a lead archeologist at Guard, says, “We found they were likely to date back to the early 1800s, and although there were no medical professionals living in the house, we believe they had friends who were.”

Like Loading...
‹ The human bones scattered around this spooky forest may outnumber the trees.
This British artist was convicted of stealing body parts to create his sculptures. ›