Skull of the executed murderer and cannibal Alexander Pearce 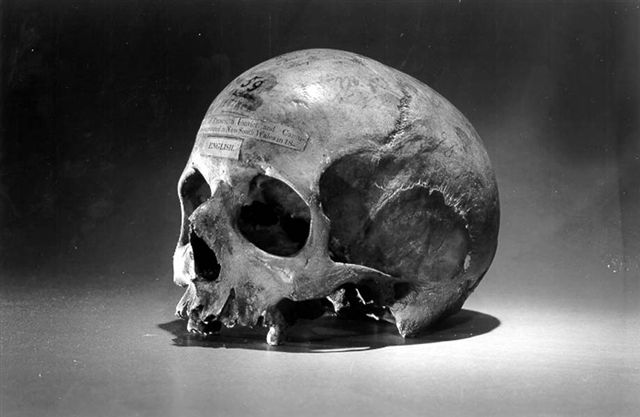 The skull of Alexander Pearce. The label on the skull reads, “Skull of Pearce, a convict and cannibal who executed in New South Wales in 18-. Image credit: Wikipedia

Alexander Pearce (1790 – 1824) was a petty thief, murderer, and cannibal who was executed on Van Diemen’s Land, what is now Tasmania, for murdering and eating a fellow inmate.

Pearce was born and raised in Ireland and eventually became a thief. In 1819 he was sentenced to penal transportation to Van Diemen’s Land where he was sentenced to serve seven years for stealing shoes. In 1822 Pearce escaped from prison and when he was recaptured he was sent to a harsher penal settlement at Sarah Island in Macquarie Harbor.

That same year Pearce escaped Macquarie with five other inmates. After more than 110 days on the loose he was recaptured alone and confessed that he and the other escapees had cannibalized each other and he was the lone survivor. But prison officials didn’t believe Pearce’s cannibalism story and returned him to Sarah Island. They thought the other convicts were still living as bushrangers in the Tasmanian wilderness.

Within a year Pearce escaped Macquarie a second time with a young convict named Thomas Cox. But this time he was recaptured within ten days. When his captors caught up with him they found Cox’s body parts in Pearce’s pockets.

Pearce’s skull held at the Univ. of Pennsylvania. Source: Archives Office of Tasmania

Pearce confessed that he killed Cox in rage when they reached a river crossing and he realized Cox couldn’t swim. After he murdered Cox he cannibalized his remains. Apparently Pearce ate the other convict for fun because when he was captured he still had food left.

Pearce was tried and convicted of murdering and eating Thomas Cox, and was hanged at the Hobart Jail on Tasmania (at the time part of New South Wales) on July 19, 1824, then his body was taken to surgeons for dissection.

Pearce’s skull ended up in the collection of infamous American phrenologist, Dr. Samuel George Morton. In 1853 Morton granted his collection to the Academy of Natural Science in Philadelphia. The Academy then gave Pearce’s skull, along with others from Morton’s collection, to the University of Pennsylvania’s Museum in 1968, where it is to this day.

The skeletal remains of two saints are displayed at a church in…Kentucky?!