Smiling with a dead man’s teeth 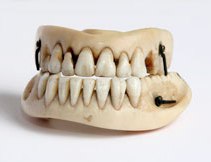 Today dentures are commercially produced in a dental laboratory or by a denturist using tissue shaded acrylics.   These false teeth are one-of-a-kind because they are made to fit the wearer’s mouth and to look like natural teeth.  But this process wasn’t developed until the 20th century.

In the 18th century, full and partial dentures were made with hippopotamus, walrus and elephant ivory that were fitted with animal teeth.  For example, George Washington’s dentures had a denture plate made out of carved hippopotamus ivory and were fitted with parts of teeth from horses and donkeys.  These early dentures were only used for appearances and could not be used to eat and were taken out before any meal.  Early dentists started making dentures with real human teeth because dentures made from ivory easily stained, gave off a foul smell, were uncomfortable to wear.

Dentists obtained human teeth from executed criminals, poor people who needed the money, or from grave robbers who took them from corpses.  But these teeth were usually poor quality due to the lifestyle of the former owners.  Sadly, one of the best sources of good quality teeth was the battlefield because most of the men who died were young and healthy.

On June 18,1815 the French Army was defeated at the Battle of Waterloo by a coalition consisting of the English and the Prussian Empires, and an estimated 50,000 men lost their lives that day.   So many teeth were harvested from corpses after the battle and sent back to England for dentures that any set of false teeth made with human teeth from then on became known as ‘Waterloo teeth.’

This morbid chapter of dental history was relatively brief and ended during the 1850’s, when manufacturers starting setting porcelain teeth in dental Vulcanite, or hardened rubber.

Dentures. Retrieved on March 18, 2014 from: http://www.sciencemuseum.org.uk/broughttolife/techniques/dentures.aspx

Three DeathHacks for a Corpse: Books, Necropants, and a Body Parts Table

Four Deathhacks for an Egyptian Mummy