Scurvy is a metabolic disease caused by a lack of dietary vitamin C (ascorbic acid). Vitamin C is a water-soluble vitamin found in fresh fruits and vegetables that contribute electrons to enzymes that participate in collagen synthesis. Since humans can’t synthesize vitamin C and don’t have the ability to store it, we need a constant supply of it in our diet to avoid nutritional deficiencies (Waldron 2009).

Defective collagen caused by a lack of vitamin C can result in impaired skin, join, bone, and blood vessels. Medical symptoms of scurvy include shortness of breath, bone pain due to swelling of the long bones, skin that easily bruises, bleeding gums, tooth loss, irritability, and impaired wound healing. The effects of scurvy on bones are directly related to defects in collagen, defective osteoid formation, and increased bone resorption (Waldron 2009).

The radiological features of scurvy in the juvenile skeleton include (from Radiopedia and Waldron 2009):

The radiological features of scurvy in the adult skeleton include (Radiopedia, Meyers 2012, and Waldron 2009): 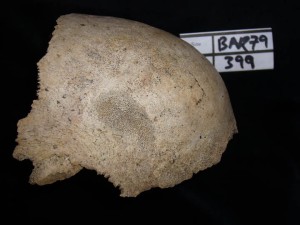 The need for constant vitamin C was a real problem during times of famine, long sea voyages, or when the supply of fresh fruit and veggies became scarce.  Once vitamin C is reintroduced to the diet, the recovery is fast.

In 1494 Christopher Columbus (1451-1506) and 1,500 colonists founded the settlement at La Isabela. La Isabela was the first permanent European town in the Western Hemisphere, but was abandoned within four years due to disease (such as smallpox, influenza, and malaria) and a lack of supplies.

A team of forensic archaeologists published an article in the April 2014 issue of the International Journal of Osteoarchaeology in which they explored the damaging effects of scurvy on Columbus’ second voyage and the short-lived settlement at La Isabela, in modern-day Dominican Republic. The study authors argue that scurvy plagued Columbus’s first colony and significantly contributed to the illnesses behind the colony’s failure (Vergano 2014).

Since the 1980s, archaeologists have been exhuming the bones of La Isabela’s first inhabitants from burials in the small graveyard behind the church in the abandoned village and storing the bones at the Museo del Hombre Dominicano in Santo Domingo. The article’s authors found that the remains of 20 of the 27 individuals had subperiosteal bone deposits and striations on the external surface on weight-bearing bones. The morphology, distribution, and healing stages of most of these bone lesions suggest the presence of scurvy (Vergano 2014).

The research team believes that the when the settlers arrive on Hispanola they were weakened by the two-month long voyage, and likely already suffered from scurvy when they arrived in 1494.  They argue that the Spaniards who were buried at La Isabela had suffered from scurvy but also healed from it before they died, and this severe nutritional deficiency may have weakened the colonists and contributed to deaths and the eventual demise of the colony (Vergano 2014).

Study author Vera Tiesler, an archaeologist at Mexico’s Universidad Autonoma de Yucatán, acknowledged that these findings were met with doubt at a 2010 bioarchaeology meeting. Archaeologists that had reservations about the findings of this article did not see evidence of scurvy in the colonists’ written accounts from the time (Vergano 2014).

But Tiesler counters, “Diagnosis from old letters is very difficult. We argue [that] the historical evidence and what we see on the bones support the argument for very bad cases of scurvy.”

Weerakkody. Y and Radswiki et al. Scurvy. Retrieved on May 4, 2014 from: http://radiopaedia.org/articles/scurvy

A morbid donation only a medical museum could love

Like Loading...
‹ Almost 400 years after his death, the search is on for bullet-riddled remains of Don Quixote author
[Update] New clues in the search for the elusive heart of Sultan Suleiman the Magnificent ›