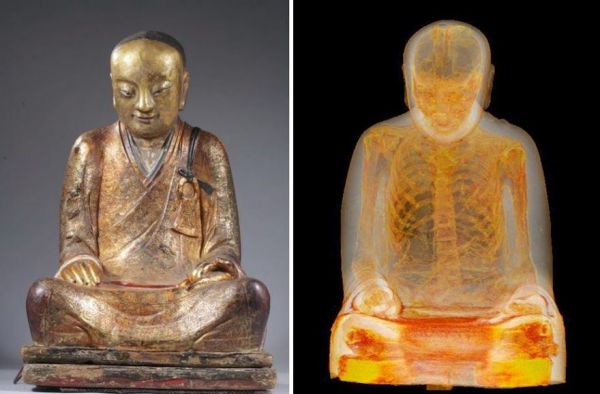 Photo of the Buddhist statue on the right and the CT scan on the left. Image Credit M. Elsevier Stokmans via Neatorama

Last year the Drents Museum in the Netherlands displayed a large Buddhist statue as part of their “Mummies: Life Beyond Death” exhibit. This was the first time that this statue had been presented outside of China.

Why was a statue part of a mummies exhibit?

CT scans revealed that the statue contains the body of a Buddhist monk who lived around 1100 AD. According to reports from December, the mummy belongs to a Buddhist master by the name of Liuquan, who was part of the Chinese Meditation School. In addition to tissue and bone, researchers found pieces of paper painted with Chinese characters in the thoracic and abdominal cavities.

Experts took bone and tissue samples for further testing and the research will be published in a detailed study. The mummy will next be displayed at the National Museum of Natural History in Budapest until May 2015.

This maybe a case of self-mummification, a deadly ritual practiced by ascetic monks from the 11th-20th centuries in Japan, Russia, Mongolia and Thailand. Self-mummification was a way for monks to defeat suffering and achieve enlightenment through meditation and severe deprivation. This grueling practice took years to complete and involved starvation and dehydration. When the monk felt like he was close to death, his body was arranged in the lotus position inside a coffin or a tomb. Bodies of monks who successfully completed self-mummification were placed in a temple, adorned, and tended to by followers.

Farrier, J. (2015 February 20). CT Scan Reveals That Statue of the Buddha Is Actually a Mummy. Neatorama. Retrieved from: http://www.neatorama.com/2015/02/20/CT-Scan-Reveals-That-Statue-of-the-Buddha-Is-Actually-a-Mummy/

Like Loading...
‹ The skull of a medieval martyr used to make medicinal powders
The charnel delights of Sedlec Ossuary ›