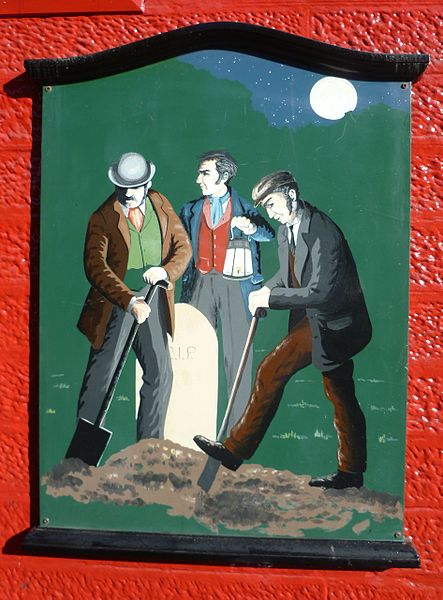 A painting of body snatchers at work on the wall of the Old Crown Inn in the High Street of Penicuik in Midlothian. Image via Wikipedia.

Harvard Medical School was founded by Dr. John Warren on September 19, 1782 making it the third oldest medical school in the U.S.  The alumni and faculty at this respected institution have made advances in the field of forensic science for more than a 100 years.

But with the good comes the scandalous.  Harvard Medical School has skeletons in its closet (or basement) that include body snatchers, a pit of human bones, and a gruesome murder.

In the 17th century the colony of Massachusetts allowed anatomy teachers to dissect cadavers every four years. By the early 19th century the state permitted medical schools to dissect bodies belonging to criminals, the poor, insane, and corpses that were donated (Hodge 2012).  Because there still wasn’t enough corpses for anatomy classes, students at Harvard Medical School took matters into their own hands and obtained cadavers from resurrection men or learned how to harvest bodies from graves on their own.

Some early students of the medical school started the unfortunately named Spunker Club, also known as the Anatomical Club, with the goal of robbing graves to get corpses for class (Hodge 2012).  Like other resurrection men, Spunkers prided themselves on their ability to evade capture and to leave a grave looking undisturbed (Hodge 2012). Some of the more well-known Spunkers included anatomists and physicians like Dr. John C. Warren, Samuel Adams Jr., and William Eustis. Although Harvard never officially recognized this organization, Dr. John Collins, who founded the medical school, certainly knew what his students were up to.

Dr. John Collins Warren (son of John Collins) discusses in a letter a night (circa 1796) when he and his friends were almost caught (Warren 1860):

“Having understood that a man without relations was to be buried in the North Burying-Ground, I formed a party, of which Dr. William Ingalls was one. He was a physician of Boston at that time. We reached the spot at ten o’clock at night. The night was rather light. We soon found the grave; but, after proceeding a while, were led to suspect a mistake, and went to another place. Here we found our selves wrong, and returned to the first; and, having set watches, we proceeded rapidly, uncovering the coffin by breaking it open. We took out the body of a stout young man, put it in a bag, and carried it to the burying-ground wall. As we were going to lift it over and put it in the chaise, we saw a man walking along the edge of the wall outside, smoking. A part of us disappeared. One of the company met him, stopped him from coming on, and entered into conversation with him. This individual of our party affected to be intoxicated, while he contrived to get into a quarrel with the stranger. After he had succeeded in doing this, another of the party, approaching, pretended to side with the stranger, and ordered the other to go about his business. Taking the stranger by the arm, he led him off in a different direction to some distance; then left him, and returned to the burying-ground. The body was then quickly taken up, and packed in the chaise between two of the parties, who drove off to Cambridge with their booty. Two of us staid to fill the grave: but my companion, being alarmed, soon left the burying-ground; and I, knowing the importance of covering up the grave and effacing the vestiges of our labor, remained, with no very agreeable sensations, to finish the work.  However, I got off without further interruption; drove, with the tools, to Cambridge; and arrived there just before daylight.

When my father [Dr. John Warren, founder of Harvard Medical School] came up in the morning to lecture, and found that I had been engaged in this scrape, he was very much alarmed; but when the body was uncovered, and he saw what a fine, healthy subject it was, he seemed to be as much pleased as I ever saw him. This body lasted the [entire anatomy] course through.”

Holden Chapel, built in the mid 1700’s and home to Harvard Medical School’s medical laboratory from 1782 to about 1850, underwent renovations in 1999. A construction worker operating a mini bulldozer in the chapel’s basement discovered human remains and various lab waste when his machine broke through a wall into an old dry well or cesspool (Longergan 1999, Stolze 2015a).  When archaeologists excavated the site they unearthed various laboratory and domestic trash such as glass test tubes, graduated cylinders, flask, specimen jars, chamber pot fragments, and leather shoes (Hodge 2012, Stolze 2015a).  Because of the building’s history as an anatomy and chemistry lab, they also found traces of hazardous materials like arsenic, zinc chloride, and formaldehyde (Hodge 2012).

According to a forensic analysis, the bones are from body parts from at least 11 people, males and females, adults and children.  The bones had cut marks consistent with dissection techniques and vertebrae mounted in anatomical order (Hodge 2012). These anatomical specimens were apparently thrown down the cistern with the other building’s trash before the it was renovated (Gewertz 1999, Hodge 2012).

On November 23, 1849 Dr. John Webster, a chemistry professor at Harvard Medical School, murdered Dr. George Parkman, a member of one of Boston’s most prominent families, when Parkman came to collect money that Webster owed him.  Over the next few days Webster dismembered and attempted to dispose of Parkman’s body.

Image of George Parkman as a “pedestrian.” Image credit: Wikipedia.

Ephraim Littlefield, a janitor at Harvard Medical College and a resurrection man, grew suspicious of Webster’s odd behavior that started the day that Parkman disappeared and searched the medical college building on North Grove Street for  evidence of foul play. On Friday November 30, 1849 Littlefield discovered body parts in the privy vault that were later identified as belonging to Dr. George Parkman.  The police were alerted of the gruesome discovery and searched the building from top to bottom, it was during this search that they found body parts in a tea chest in Webster’s laboratory, body parts in the privy vault, and human bones in Webster’s furnace.

The murder trial of John Webster is significant to the history of forensic science because it was the first murder trial in which anatomists and physicians used human remains and false teeth to identify a dismembered body.

The remains were given a post-mortem examination by several anatomists and physicians from Harvard Medical School. According to expert testimony, the body was dismembered by someone familiar with anatomy and post-mortem examinations.  The post-mortem report state that the remains belonged to a man who was between 50 and 60 years old (Parkman was 59 when he died), and the height and build of the body parts were consistent with Dr. Parkman.  Also most of the organs were removed and the killer tried (unsuccessfully) to macerate the flesh with various chemical substances (The Trial of Prof. John Webster, 1850 p. 10, 11).

Dr. Jeffries Wyman, professor of anatomy at Harvard, examined the bones from the furnace and testified that all of the bones were from one person because there were no duplicates-although he could not say to whom the bones belonged. Wyman argued that the bones recovered from the furnace likely belonged to the same person whose body parts were found in the tea chest in Webster’s lab and the privy vault because the bones corresponded to missing body parts that were not found anywhere else (The Trial of Prof. John Webster, 1850 p. 11).

Image of the jaw bones and denture recovered from the furnace. Image Credit: Snipview

Dr. Keep, Dr. Parkman’s dentist, examined the dentures found in Webster’s furnace and was able to identify them as the set he made Parkman in 1846. Keep, who regularly saw Parkman to make adjustments to his false teeth, had just seen Parkman two weeks before his disappearance. The dentures retrieved from the crime scene fit the plaster mold Keep made of Parkman’s jaw (The Trial of Prof. John Webster, 1850 p. 13, 14).

Webster was found guilty of murder on March 30, 1850. In June Webster confessed to killing Parkman and was publicly hanged on August 30, 1850.

Stolze, D. (2015a).  Bodies in the Basement: The forgotten stolen bones of America’s medical schools.  Retrieved from: http://www.atlasobscura.com/articles/bodies-in-the-basement-the-forgotten-bones-of-america-s-medical-schools

Like Loading...
‹ The ‘Rembrandts of anatomical preparation’ who turned skeletons into art
19th century pictures of workers building a city of the dead ›