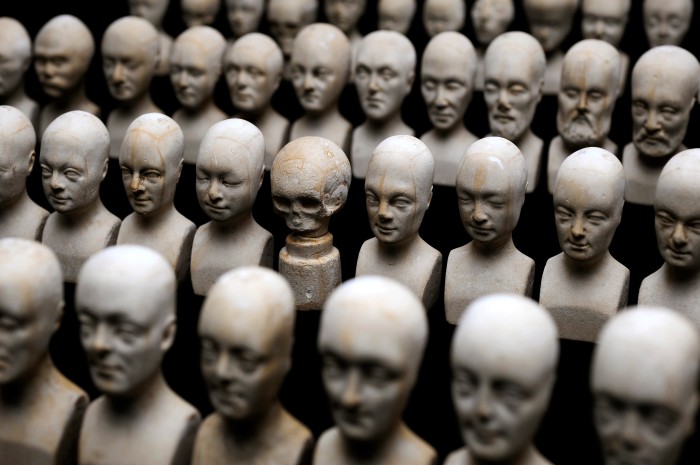 The Science Museum of London has a set of 60 eerie little plaster heads that look like miniature death masks. Johann Gaspar Spurzheim (1776-1832), a well-known 19th century phrenologist, commissioned these bizarre relics to help his students study phrenology. As phrenology became popular in the early 19th century, practitioners needed reference collections to aid their research. Doctors and anatomists could easily acquire human skulls, often by robbing graves, for their phrenology collections. But the general public wanted affordable cranial libraries of their own and these tiny plaster busts would have satisfied that demand.

Phrenology, meaning study of the mind, was based on the idea that the brain was an organ of the mind. Practitioners believed that the mind has a set of mental faculties that are controlled by different areas of the brain, called brain organs. These “brain organs” could be large or small depending on an individual’s personality traits or intelligence. Phrenologists believed the shape of the skull would correspond to these organs, forming bumps and depressions. They believed that they could ascertain a person’s character and intellect by measuring these cranial features (Aldersey-Williams 2013). 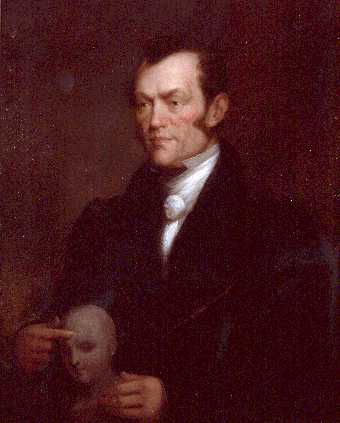 Franz Joseph Gall (1758-1828), a neuroanatomist and psychologist, developed phrenology at the end of the 18th century. Johann Gaspar Spurzheim was Gall’s lecture assistant and dissectionist until he decided to start his own competing system (Aldersey-Williams 2013). It was Spurzheim who coined the term “phrenology,” added to Gall’s list of brain organs, and organized them into a hierarchical system (“Johann Gaspar Spurzheim,” n.d.). His list of organs included: amativeness (physical love), combativeness, secretiveness, individuality, and imitation. 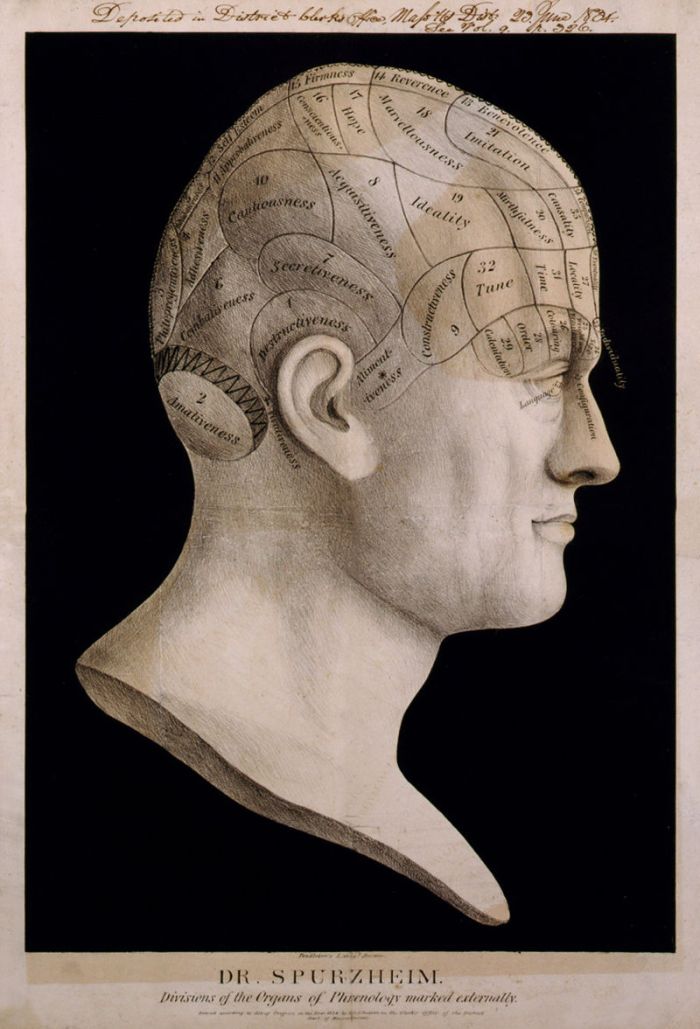 Spurzheim helped to commercialize phrenology by lecturing across Europe and America. As the study of phrenology became trendy, his research was published in several languages and went through numerous editions ((“Johann Gaspar Spurzheim,” n.d.). But phrenologists needed more than books and lectures to learn this fashionable “science,” they also wanted to see three-dimensional examples of cranial features.

It was easy for those in the medical field to acquire collections, but people didn’t typically have access to real human skulls. Spurzheim saw this need, so in 1832 he commissioned artist and phrenologist William Bally, who had worked with him since 1829, to scale down a collection of plaster heads that he felt best-represented phrenological traits (Cliff 2014). Because these little busts were based on casts taken from live and dead subjects, each 3-inch head has individualized features. Each miniature bust was numbered and came with a description that was printed by Spurzheim (Cliff 2014).

1829, and, under his direction, composed sixty miniature busts,

each about three inches high, exhibiting the organs in a great

variety of combinations. Many individuals complain of want of

ment, and to such persons these specimens will be found a very

Spurzheim, accompanies them; so that by procuring the set,

every one may study Phrenology in his own library, and exer-

cise his eyes in discriminating differences of size and form. This

exercise is of the greatest advantage in acquiring practical skill

and knowledge, and we recommend it strongly to our readers.

The whole set, with descriptions, are sold for two guineas.

We consider this the most valuable contribution which has been

made to the science for several years.

The following are examples of the descriptions

‘No. 13 – A head with Acquisitiveness very large, with the

organs of Alimentiveness, Combativeness, Self-Esteem, and

Firmness, large, and with those of Cautiousness and Conscien-

tiousness very small, and with the organs of the intellectual fa-

‘No. 27- This is the head of a noble philosophic mind,

with predominant organs of the moral and intellectual faculties,

and with the unusual harmony of the animal and human powers;

in short, a head in whose cerebral organization the Christian law

‘No. 28 – This head shews the difference between a supe-

rior retreating forehead on the left side, and an inferior perpen-

dicular forehead on the right side, when measured from Con-

structiveness and Benevolence to Individuality. From the same

line backward, both sides are of the same size and form.

‘No. 29 – A very short miserable forehead, unfit for the

manifestations of superior intellect; with the organs of Acqui-

tiveness, large, while those of Combativeness, Self-Esteem, Hope, and Benevolence, are small.“

In 1951, the Wellcome Historical Medical Museum acquired the set that is now at the Science Museum in London.  Other sets are in the collections at Johns Hopkins University and the Kulturen Museum in Sweden (Cliff 2014).

Despite it’s popularity, phrenology was still controversial in the scientific community.  The Edinburgh Review published a scathing review in June of 1815 by Gall and Spurzheim, The Physiognomical System of Drs. Gall and Spurzheim (as cited in (“Johann Gaspar Spurzheim,” n.d.):

“The writings of Drs. Gall and Spurzheim have not added one fact to the stock of our knowledge respecting either the structure or the functions of man; but consist of such a mixture of gross errors, extravagant absurdities, downright mis-statements, and unmeaning quotations from Scripture as can leave no doubt, we apprehend, in the minds of honest and intelligent men as to the real ignorance, the real hypocrisy, and the real empiricism of the authors… Such is the trash, the despicable trumpery, which two men, calling themselves scientific inquirers, have the impudence gravely to present to the physiologists of the nineteenth century, as specimens of reasoning and induction.”

Phrenology was eventually debunked and discredited but it did influence early forensic scientists like Cesare Lombroso and Alexandre Lacassagne.