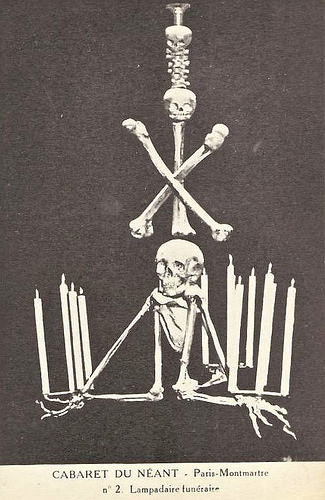 Patrons from far and wide came to sip drinks with names like Cholera and Arsenic while sitting at a coffin under a real human bone chandelier in the Cabaret of Death, a peculiar Parisian watering hole that opened in the early 1890’s. The Cabaret of Death was in the eccentric Montmartre neighborhood near the divine Cabaret of the Sky (Cabaret du Ciel), the wicked Cabaret of the Inferno (Cabaret de l’Enfer), and the infamous Moulin Rouge!. The owner eventually changed the name of the tavern to the Cabaret of Nothingness (Cabaret du Néant) to make it palatable for the locals.

The Cabaret du Néant was famous for its macabre decorations and optical illusions. In 1899, Ellsworth Douglass visited the Cabaret du Néant and wrote about the morbid décor and special effects in a review for the Royal Magazine. Below are excerpts from his article entitled “Jesting with Death.”

Entrance, ordering, and all the skeletons 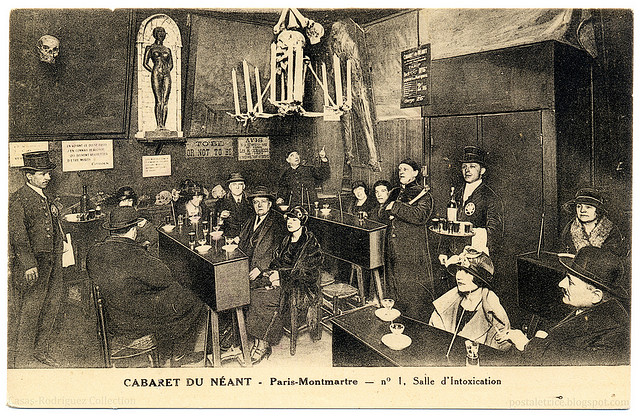 When customers entered the Cabaret du Néant they were greeted by hosts dressed in long black robes who spoke in somber tones. Patrons were ushered into the tavern area where they were asked to choose from drinks named after poisons and diseases. A human bone chandelier was hung in the center of this room, coffins were used as tables, and an articulated skeleton was treated like an honored guest by the customers.

If you are seeing the night sights of Paris, sooner or later you will be taken to a certain cabaret, and the moment you pass its black portals you will hear these startling exclamations. And woe to the visitor who is touchy, thin-skinned, or squeamish, who holds death in awe, or who understands French too well! The proprietor (who may be seen in a monk’s robe) has taken the trouble, by means of public notices on his walls, to beg impressionable people, those with affections of the heart, or having an insufficient groundling in philosophy, to go somewhere else to drink

A low room, shrouded in black, and filled with tarnished, varnished coffins, is what you see first. Gathered about these are groups of Parisian triflers and curious travellers, drinking their consommations from the coffin-tops. You must find a seat by one, and you must order some refreshment, whether you consume it or not. You must also be willing to pass over the jokes and gibes of the proprietor, his attendants, and your neighbors, which they are sure to crack at your expense. If you are asked to fill the glass of the grinning skeleton next to you do it cheerfully, and you may even offer him a light for the cigarette which he has in his other hand, or a bit of tobacco to fill the bowl of the clay pipe he holds between his gibbering teeth!

Before you have been seated long, a waiter, robed and cowled in black, comes to ask you in a lugubrious tones whether you will have arsenic, cholera, the pestilence, or merely some fresh sighs-of-the-dying! When in doubt, order strychnine. And if you are thirsty, drink it! People have been known to take it with pleasure and survive it, for that term is merely local slang for a bock of lager, which costs but sixpence ha’penny. If you prefer vermouth, you order cholera; while pestilence stands for absinthe, and sighs-of-the-dying are harmless sandwiches!

Hidden skeletons in the paintings

The paintings that were hung in the tavern seemed to depict ordinary scenes of Parisian life. But once the proprietor called attention to them, the people in the images were transformed into skeletons.

An attendant has now mounted a stool to call the attention of the company to the queer pictures on the walls of this room. They are all innocent enough to begin with, but the figures have a queer way of dying before your eyes. The first represents Pierrot on a house-top in a serenade to the moon. Young, handsome and gay he is, but by a sudden illumination of electric lights behind the canvas, the colouring laid on thinnest is no longer seen and it has become a Serenade to Death. The hatch in the roof has turned to a tombstone and the chimney tops beyond, to crosses.

The next picture shows the Heights of Montmarte, with the new cathedral in dim outline. In the foreground are editors, bankers, actors, theatre-directors, all in a heated argument or some sort. Then the lights behind melt out all the life from the picture, and leave a group of wildly gesticulating skeletons, while Montmarte has turned to fairies, and we see that old Father Time himself is dead. This picture reminds me of Carlyle’s conceit in “Sartor Resartus,” where he sees pontiffs in their resplendent robes, dignitaries in their stately trappings, ill-clad underlings, judges in wig and gown, pompous bailiffs, and ragged criminals, and points out how clothes make the man. Then suddenly he sees the clothes fall from them, and behold they are all like one another! These pictures have a Rontgenray way about them, which melts not only clothing but also the flesh out of sight.

Whether the designer of the pictures had Carlyle’s “Sartor Resartus” in mind or not, he has at least called upon two great writers to lend their support to the fundamental idea of this café. On one wall is Shakespeare’s celebrated query: “To be, or not to be?” whilst on another is Schopenhauer’s dictum: “Life is a folly which death repairs!” Even Death itself is called upon to give light on the subject, for in the middle of the room is a chandelier made whole of human bones and skulls, as shown in our photograph.

But there is another picture yet to be seen. It represents the gay frivolity of a hall in Montmarte. The acme of contrast is reached when the orchestra, the dancing students, the frolicking girls, and everything in the rowdy picture turns to grinning, capering skeletons. The rosettes around the orchestra stand changed to gaping skulls, and the huge arms of the old mill itself turn to a counterfeit of the human framework.

An 1896 issue of Scientific American discusses this trick and proposed that it was accomplished using a “transparency” in front of a “normal” painting. When the lights behind the paintings are turned on, the “normal” art faded away and the skeletons on the transparency are slowly revealed.

The Room of Disintegration 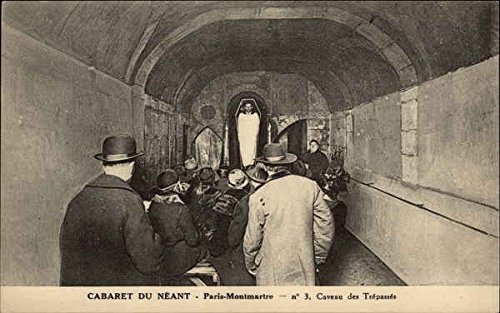 The Room of Disintegration at the Cabaret du Néant.

When the patrons finished their drinks they were led to the Room of Disintegration. Once seated, a person from the audience was asked to come on stage and stand in a coffin. This person seemed to magically decompose into a skeleton then evaporate into dust.

This is known as a Pepper’s ghost illusion. During a Pepper’s ghost optical trick, objects seem to transform into other things or appear to fade in or out. Simply put, the illusion was accomplished with a strategically placed piece of glass and a hidden room. The glass is placed at an angle on the stage so that it will reflect a view of a hidden room. When the lighting in the hidden room is increased and the lights on the stage are dimmed, the objects in the hidden room are reflected on the glass making them seem to appear like magic.

Having consumed your strychnine, you are now ready to push through the subterranean passages to the Room of Disintegration, where, if you wish, you may test how it feels to have your flesh melt and your bones dry and wither to a skeleton, and then to have your very elementary framework crumble to dust and disappear entirely. If you do not care to undergo this experience personally, you will at least, see it happen to some one else and before your very eyes.

You have been ushered through a narrow, black passage to a second sombre room, where you find a seat on one of the benches. If you wish to see the ghastly illusion at its best, find a seat as near the middle as possible as possible; but if you would avoid it, take the end of a bench and turn your gaze to the side walls. A monk sits in front of a wheezy little organ and commands the attendant, who is dressed as an executioner, to take the top off the ‘domino-box.’  Obeying he uncovers a coffin which stands on end inside a little niche in the wall. Then the monk addresses us:

“Beloved Macabres, you have at last arrived at that point in your careers where you are to leave your souls behind you. While we must require this, yet we are willing that you should be a witness to the process. Is there anyone in the company so sick of existence that he will take his place in the domino-box and undergo immediate disintegration? Have no fear! It is not only perfectly painless, but it is the only real state of happiness.”

Thus exhorted, a young man rises from the benches to try the experiment, and the monk cries out to him:

“Bid your friends an eternal farewell! Compose yourself and think on higher things. Now step into the wooden overcoat, please. It could not fit your better had it been made to measure! Now the shroud please! Cover him with it, all but the face. Are you prepared? Die then!”

The creaky organ begins a creepy funeral march; the light in the room is faint but is strongest on the man in the coffin. It pales a little and his face turns a sickly green.

“He perishes! May he rest in peace!” cries the monk, and the organ groans louder. Some women look away when the man’s teeth begin to show through his lips. Then his jaw bones show through his drawn cheeks and finally his whole skeleton is seen through the white shroud. Little by little the process goes on, as the lights upon him grow dimmer, until finally he has melted away before our eyes and only the grim skeleton remains the box.

But it does not end there. The skeleton itself seems gradually to fade, its gaunt outlines melt and it becomes a mere shadowy suggestion of the human framework; and presently the last vestige of it vanishes, and the coffin, which has been all the time in our full view, is now perfectly empty!

The success of the Cabaret du Néant inspired versions in the U.S.  One of the establishments that I could find pictures of is the Catacombs Nightclub in Ohio, which decorated its walls with plasters skulls and fake mummies.

Like Loading...
‹ Dozens of ghost ships found off the coast of Japan
A 13th Century Guide to Forensic Anthropology ›