The occultist rocketeer of the real-life Suicide Squad 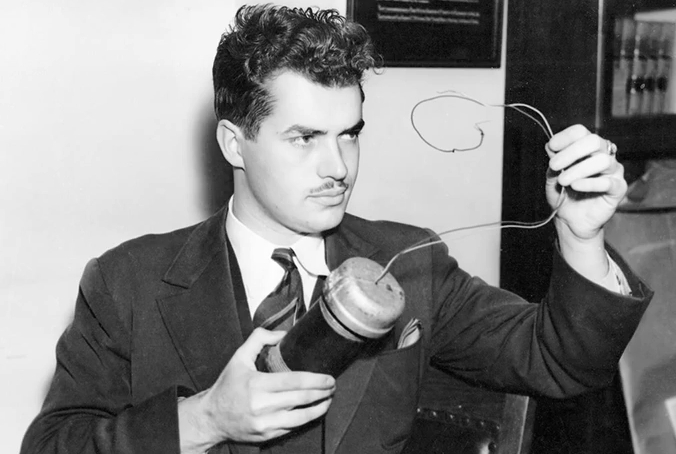 Photo of Jack Parsons from a 1938 edition of the LA Times. Parsons pictured w/the replica bomb he built for the Kynette trial. Image from Wikipedia.

Although the Suicide Squad is best known today as a movie about a fictional group of supervillains drafted by the government to undertake dangerous missions in exchange for commuted sentences, there was a real-life Suicide Squad at Caltech in the 1940’s. As I read about the original Suicide Squad, I became fascinated with the life and death of its strangest member, Jack Parsons.

Jack Parsons (2 October 1914-17 June 1952) was an explosives aficionado who worked at the rocketry research lab at Caltech, who also helped establish Aerojet and the Jet Propulsion Laboratory (JPL). Parsons’ devised rocket fuels that were the predecessors for the fuel that powered the NASA space shuttles, and made advancements in rocket propulsion, or jet propulsion, at a time when rockets were more likely to be written about in science fiction novels than studied at any university.1  During his short life he also testified as a forensic explosives expert, was deeply involved in occult magic, tried to conceive a supernatural child through a series of sex Magick rituals, and befriended L. Ron Hubbard.

In 1952, Parsons died at the young age of 37 from fatal injuries he suffered from an explosion at his home laboratory. Although officially deemed an accident, some believed the explosion could have been set on purpose, either by Parsons to end his life or by an unknown assassin.3,9

Marvel Whiteside Parsons, better known as Jack Parsons, was born to a wealthy Pasadena family in 1914. He tried to pursue his interest in rockets after high school by attending Pasadena Junior College and Stanford University but he had to drop out when his family fell on hard financial times.

Parsons didn’t let the lack of a formal education stop him from pursuing his dreams. He and his friend from high school, Ed Forman, tested homemade rocket engines powered by gunpowder.1 Parsons would mix the fuels for the rockets and Forman would build the engines. When they decided to build a more difficult liquid propellant rocket motor, Parsons and Forman looked to a local university for help.2

They attended a seminar on rocket-powered aircraft in 1935 at the California Institute of Technology (Caltech), one of the few universities where students could study rocket engineering. Parsons and Forman were put in touch with a PhD student named Frank Malina, who was writing a thesis on rocket propulsion.2 Theodore von Kármán, the director at Guggenheim Aeronautical Laboratory (GALCIT) at Caltech, let Parsons, Forman, and Malina work on their projects in the GALCIT lab. Then in 1936 Malina created a degree program for which they were to build a rocket that could be fueled by solid or liquid propellants.2 From then on the trio was formally known as the GALCIT Rocket Research Project. 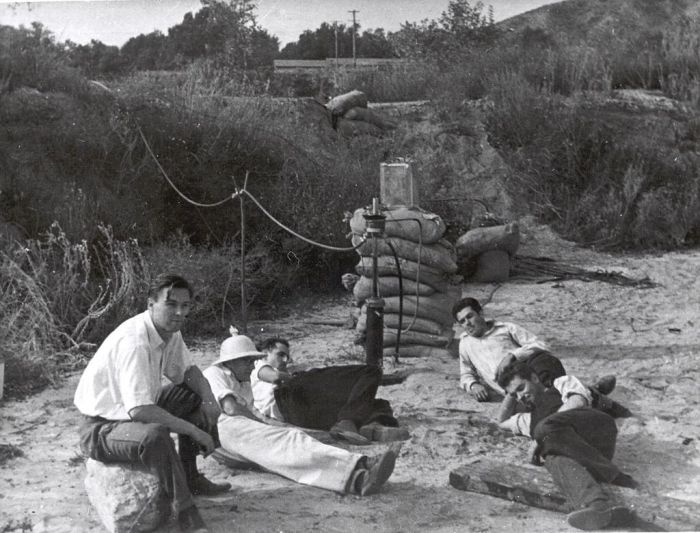 Parsons scouted locations to test their rockets and was reportedly drawn to the sinister energy of the Devil’s Gate Gorge, which got its name from a rock face in the canyon that resembles a profile of a horned demon.7 The Devil’s Gate Gorge was located at the narrowest part of the Arroyo Secco Canyon near the site of a dam, about a quarter mile from the Caltech campus. The GALCIT Rocket Research Project conducted its first test in Devil’s Gate Gorge on October 29, 1936.2 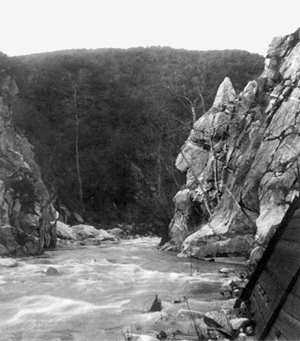 The Devil’s Gate at the Arroyo Seco River. The “devil’s profile” can been seen in the rock to the right. Image from Wikipedia.

After a series of tests in the gorge, and no one was hurt or killed, von Kármán granted the GALCIT Rocket Research Project access to testing facilities on the Caltech campus. The rocketry group was notorious at Caltech because their experiments often resulted in damage to campus property. During one test a leaky valve spewed a caustic liquid all over the campus lawn and turned it brown. After another experiment, a motor misfired and emitted a gas in the laboratory that rusted all of the equipment.2 During another test a piece of equipment was hurled across the lab and was embedded into a wall. The members of the GALCIT Rocket Research Project became infamous for their perceived collective death wish so their fellow students referred to them as the Suicide Squad. Soon the Suicide Squad was forced to return to the Devil’s Gate Gorge to protect the students and the campus.10 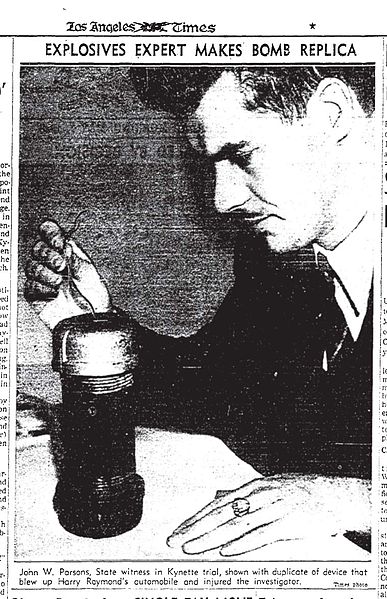 Photo from the LA Times (1938) of Jack Parsons with the replica pipe bomb used in the Kynette Trial. Image from Wikipedia.

The Suicide Squad didn’t get funding for the first few years of its work. In order to make extra money Parsons testified as a forensics explosives expert witness. His most well-known forensics work was for the trial of Captain Earl Kynette in 1938. In the late 1930’s, a private investigator, and former LAPD detective, named Harry Raymond investigated corruption within the Los Angeles Police Department (LAPD) and city government. Some powerful people were scared of what Raymond’s inquiries would reveal and decided to stop him at all costs.

On January 14, 1938 Raymond was injured by a car bomb that had been planted under his car. Captain Earl Kynette was the prime suspect and stood trial for attempted murder. Parsons was hired to construct a replica bomb and deduce the explosives used to ignite it. He successfully reconstructed the bomb and the resulting explosion. Kynette was found guilty and shipped to San Quentin. Parsons expert testimony is largely credited with the resulting guilty verdict.3

In 1939, the Suicide Squad received its first funding from the American Institute of Aeronautics and Astronautics (AIAA), the National Academy of Sciences (NAS), and the military. As World War II started to ramp up, Parsons and the Suicide Squad were tapped by the US Air Corps to design and manufacture Jet-Assisted take Off (JATO) engines and formulate stable solid rocket fuels that could be stored for a long time.4

The GALCIT Rocket Research Project eventually branched off into two entities to handle production and research. Aerojet was established in 1941 to fulfill the engine orders for the government and the Jet Propulsion Laboratory (JPL) was started in 1943 for rocket engine research and development.1 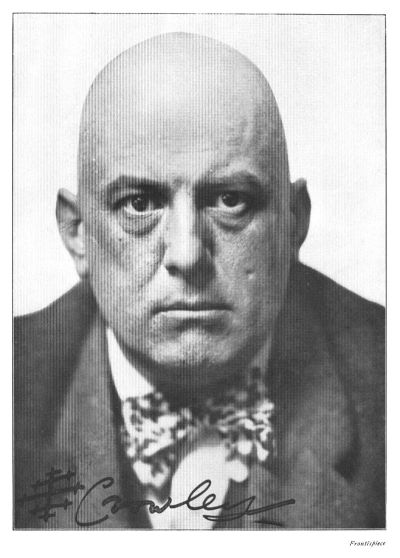 The “wickedest man in the world” Aleister Crowley. Image from Wikipedia.

Parsons life changed when he attended a Gnostic Mass hosted by an occult group called the Church of Thelema in 1939. Thelema was a religion and philosophy founded by Aleister Crowley, an infamous English occultist. Thelema’s dominant principle was “Do what thou wilt shall be the whole of the Law.” 1 According to George Pendle, author of the Parsons biography Strange Angel, Jack was attracted to the occult because he believed magic challenged the physical limits of the world, like the rockets he studied, and could be used as a tool to explore “unseen metaphysical worlds.” 1 Parsons joined the California branch of the Thelemite group, known as the Agape Lodge, and immersed himself in the Thelema’s occult “Magick.” 1 Crowley changed the spelling to Magick in order to distinguish his occult practice from stage magic because it was meant to be “the Science and Art of causing Change to occur in conformity with Will.”

Parsons used the money he earned from Aerojet to lease a house in Pasadena’s Millionaire’s Row, which he called the “Parsonage.” 1 The Thelamite Agape Lodge relocated to the “Parsonage” and Jack rented rooms to artists, writers, and social misfits.

Jack parted ways with Aerojet around the end of World War II. Parsons believed that there wasn’t much business for rocketry after the war and Aerojet was eager to separate itself from Parsons’ weird personal life.5,6 In 1944 Parsons sold his Aerojet stock for $50,000 and purchased the lease on the Parsonage.6

In 1945 Jack met and befriended a young sci-fi writer named L. Ron Hubbard, who would eventually found the Church of Scientology. From January to March of 1946 Parsons and Hubbard conducted a series of sex magick rituals, called the Babalon Working, that were meant to conceive and incarnate the Thelemite goddess, Babalon. 6

After Parsons and Hubbard completed the Babalon Working, Hubbard ran off with Jack’s girlfriend. Jack wouldn’t be heartbroken for long.

In February of 1946, Parsons meet a new Parsonage resident named Marjorie Cameron, who he believed was sent to him to help him conceive the goddess Babalon in human form. Jack and Marjorie were married on October 19, 1946.

In 1949 Parsons started work with the Hughes Aircraft Company to design and construct a chemical plant. The next year, Hughes reported some confidential documents missing that were related to its rocket program. After an investigation by the FBI, investigators suspected that Parsons was involved with the theft and had planned to submit the files to the Israeli government in return for a job.7 Parsons was fired from Hughes, his security clearance was revoked, and he was permanently banned from working on classified projects. The only reason he was not arrested for espionage was that the documents were not considered state secrets.6

For the next few years Jack had to work odd jobs, some of which involved mixing explosives in his home lab. On June 17th, 1952 Parsons was mixing and packing explosives for a trip to Mexico when a blast ripped through Parson’s Pasadena home.

When police arrived at the house, they found Jack on the floor surrounded by rocket propulsion notes and occult drawings. He was missing half of his face and most of his right arm. There is some discrepancy regarding his last words. According to one source, his last words were, “I wasn’t done.” And another source recounts them as “Who will take care of me now.” 6 About an hour later Jack Parsons was dead. 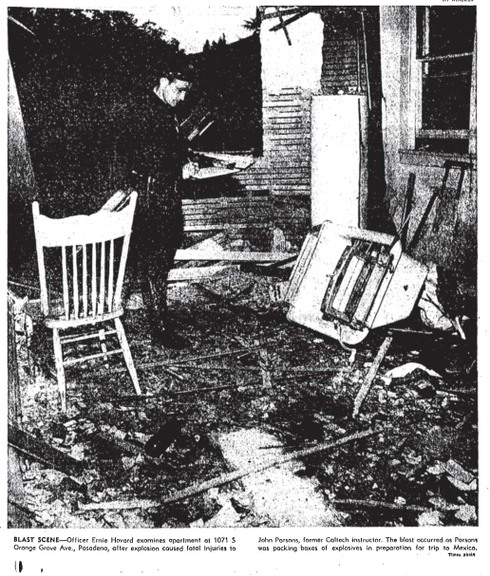 The detectives investigating Jack’s death found that the blast occurred as the result of an accident when Jack dropped bottle of explosive material. 8 Despite this decision, rumors of suicide and assassination and persisted among his friends, family, and the community.3 Some of his former housemates believed he could have committed because he was depressed due to the downward spiral of his career or personal life.3 Others thought he might have been assassinated by the LAPD for his role in convicting their brother in blue, Captain Earl Kynette.3,9 This tragedy was compounded when Jack’s mother, Ruth Parsons, committed suicide by overdosing on sleeping medication within hours of Jack’s death.

Today Aerojet is known as Aerojet Rocketdyne and is a manufacturer of rocket and missile propulsion systems. And JPL is managed by Caltech for NASA and is located near the Devil’s Gate Gorge where the Suicide Squad conducted their first tests.

Jack Parsons is regarded as one of the fathers of rocketry because of his innovations in rocket engineering and early support of space exploration.