Home › History › Beauty to die for: How vanity killed an 18th century celebutante

Beauty to die for: How vanity killed an 18th century celebutante 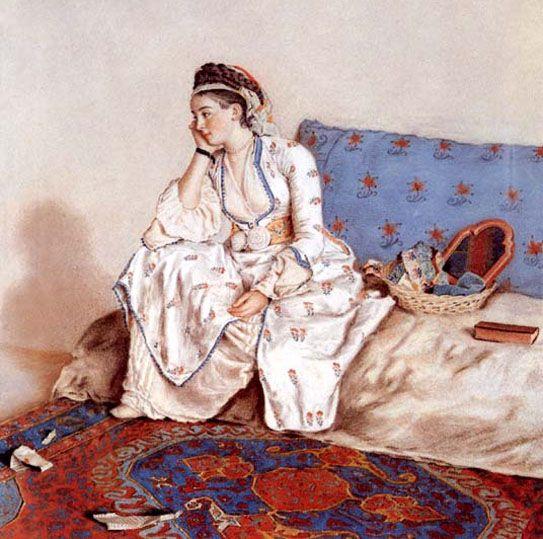 Between the 15th and 18th centuries, many people applied cosmetics that contained deadly toxins to achieve the look of a flawless complexion.  This harmful makeup often worsened the wearer’s skin, caused physical discomfort, and, in at least one case, death.  An 18th century celebutante named Maria Coventry, the Countess of Coventry, is the best known example of someone who died because of her affinity for lead-filled makeup.
The use of lead-based cosmetics goes back hundreds of years. Women of ancient Green and Rome whitened their skin with powders and creams made out lead.1  Aristocratic Roman women, in particular, used a white lead called cerussa as base for their cosmetics.  Also, ancient Egyptian eyeliner was made out lead sulfide, copper, and kohl.2 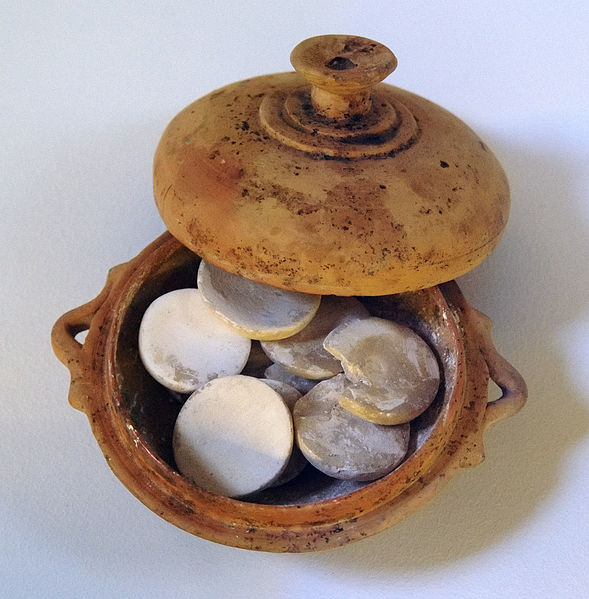 Make-up pot with molded tablets of white lead found in a tomb from the 5th c. BC; at the Kerameikos Archaeological Museum. Image credit: Bibi Saint-Pol via Wikipedia

European women and men, between the 15th to the 18th century, used a cream made out of white lead and vinegar to achieve the “dead white” look was all the rage.  Venetian ceruse, a type of lead-based make up and skin-whitener, was popular amongst the wealthy during this period because of its superior coverage and smooth finish.3  Queen Elizabeth I was known to paint her face with it to cover her small pox scars.3,4  But the side effects of this toxic cosmetic included skin discoloration, erosion of dental enamel, hair loss, and illness.
Lead-filled makeup made many people sick and, in at least one case, caused death.  One of the most famous examples of death by makeup was the demise of Countess Maria Coventry, née Gunning, an 18th century celebutante who was famous for her beauty and societal exploits.
Maria Gunning (1733-30 September 1760) was born in Hemingford Grey, Huntingdonshire in 1733 and was raised in her family’s home in Ireland, Castle Coote.  The oldest of six children, her siblings included: Elizabeth, Catherine, Sophia, Lizzie, and John.  Because the Gunning family was poor, Maria’s mother encouraged her daughters to take up acting to earn a better living and improve their social standing.5  Once Maria and her younger sister, Elizabeth, were old enough they moved to Dublin to work in the city’s theaters.
The sisters became well-known amongst the Dublin upper crust for their beauty and were invited to all of the best parties.  But the duo soon outgrew Dublin and set their sights on a larger pond.
Around 1750 they moved to London and partied with royalty, including George II, at the Court of St. James.  Maria and Elizabeth became so famous that the general public gossiped and wrote about their social escapades.
An 1895 edition of The Century Dictionary: The Century cyclopedia of names reported the following:
“They [Maria and Elizabeth] were followed by crowds wherever they went, and Maria, who was the better looking, was mobbed one evening in Hyde Park.  The king gave her a guard to protect her, and she once walked in the park of two hours with 2 sergeants of the guard before her and 12 soldiers following her.”6
One of the things that made Maria Gunning particularly beloved was her unfiltered way of speaking to anyone, including royalty.5  In 1865, Arthur Bailey Thompson wrote about an embarrassing remark Maria made in front of George II in The Victoria History of England: From the Landing of Julius Caesar, B.C. 54.  Thompson wrote:
“George the Second, conversing on one occasion with Lady Coventry, regretted the dullness of the town.  The Countess combated His Majesty’s statement, observing, ‘As for sights I am quite satisfied with them; there is only one I am eager to see, and that is a coronation.’  The old King seemed highly pleased at the simplicity of this inappropriate Irish remark.”7
Maria and Elizabeth parlayed their good looks into marriages to aristocratic men within a year of their move.  Elizabeth married James George Hamilton, the 6th Duke of Hamilton, and Maria married George William Coventry, the 6th Earl of Coventry.  It’s no wonder then that the Countess of Coventry felt pressured to preserve the beauty that had brought her so far.  She was known to apply thick layers of toxic make up to enhance her pale skin and rosy cheeks.

Lady Coventry passed away on September 30, 1760 at either 27 years-old (or 28 years-old) from consumption, known today as tuberculosis.8  According to some 19th century accounts, Lady Coventry retreated to her darkened bedroom in the weeks prior to her death and didn’t allow any visitors.9  Many people referred to her premature end as a “death by vanity” because it was rumored that lead-poisoning from her makeup contributed to her death.10
Lead-poisoning is caused by the inhalation, absorption, or ingestion of high amounts of lead. Once in the blood stream, lead accumulates in bodily tissues including hair, teeth, and bone.  Symptoms of lead poisoning include anemia, high blood pressure, headache, abdominal pain, irritability, memory loss, and muscle pain and weakness.11  In the living, this condition is diagnosed with blood and urine tests, as well as x-rays.12
Lead primarily affects the nervous system, but also disturbs the reproductive, cardiovascular, and immune systems.  Therefore, Maria Coventry’s immune system could have been weakened by the lead in her makeup, which could have left her susceptible to tuberculosis.
Maria was never diagnosed with lead-poisoning while she was alive and no post-mortem exam was conducted on her body.  The only way for scientists to confirm whether or not she had dangerous amounts of lead in her system would be to exhume her remains to test her bones, teeth, or fingernails.  Archaeologists performed tests like these on some of the bodies recovered from the doomed 1845 Franklin expedition, two ships helmed by Sir John Franklin in search of the Northwest passage, to find out if some of the crew had high levels of lead in their system when they died.13  Though the conclusion that the unlucky Franklin crew died from lead-poisoning is debatable.14
More than 250 years later people are still fascinated by Maria Gunning.  In 2012, a 7-foot-tall giltwood mirror that belonged to Lady Coventry went up for auction and fetched more than £300,000.  Maria died a year after it was ordered.15,16
Works Cited
1) Salisbury, J.E. (2001). Encyclopedia of women in the ancient world.  Santa Barbara, CA: ABC-CLIO.
2) Mapes, D. (2008).  Suffering for beauty has ancient roots.  Retrieved from: http://www.nbcnews.com/id/22546056/ns/health/t/suffering-beauty-has-ancient-roots/#.WGrA8bF-IdU
3) Eldridge, L. (2015).  Face paint: They story of make up. New York, NY: Abrams.
4) Little, B. (2016).  Arsenic pills and lead foundation: The history of toxic makeup.  Retrieved from: http://news.nationalgeographic.com/2016/09/ingredients-lipstick-makeup-cosmetics-science-history/
5) Maria Gunning, Croome’s beauty. (N.D.). Retrieved from: https://www.nationaltrust.org.uk/croome/features/maria-gunning—the-great-beauty-of-croome
6) “Gunning, Maria.” 1895.  The century cyclopedia of names. Benjamin E. Smith (eds).  New York, NY: The Century Co.
7) Thompson, AB. (1865).  “The Beautiful Gunnings” in The Victoria History of England: From the Landing of Julius Caesar, B.C. 54. London: Routledge, Warne, and Routledge.
8) “Coventry, Maria.” (1887). Dictionary of national biography.  Charles Welch (ed).
9) “The beauties of bygone days.” (1891).  The Illustrated American, Volume 8. New York, NY: The Illustrated American Publishing Co.
10) Bolton, A. (2006).  AngloMania: Tradition and Transgression in British Fashion.  New York, NY: The Metropolitan Museum of Art
11) Mayo Clinic Staff. (N.D.). “Lead poisoning.” Retrieved from: http://www.mayoclinic.org/diseases-conditions/lead-poisoning/symptoms-causes/dxc-20275054 ; https://medlineplus.gov/ency/article/002473.htm
12) Vij, K. (2011).  Textbook of forensic medicine & toxicology: Principles & practice.  Chennai, India: Elsevier.
13) McDiarmid, M.  (2014).  “Franklin expedition: More doubts raised that lead poisoned the crew.”  Retrieved from: http://www.cbc.ca/news/politics/franklin-expedition-more-doubts-raised-that-lead-poisoned-the-crew-1.2490875
14) Witze, A. (2016). “Fingernail absolves lead poisoning in death of Arctic explorer.”  Retrieved from: http://www.nature.com/news/fingernail-absolves-lead-poisoning-in-death-of-arctic-explorer-1.21128
15) “Historic mirror set to sell for thousands.”  (2012).  Retrieved from: http://www.worcesternews.co.uk/news/9719362.Historic_mirror_set_to_sell_for_thousands/
16) Oliver, A. (2012). “Vanity mirror used by tragic 18th century society beauty, 27, who died of make-up poisoning sells for £300,000.”  Retrieved from: http://www.dailymail.co.uk/news/article-2151541/Vanity-mirror-used-tragic-18th-century-society-beauty-27-died-make-poisoning-sells-300-000.html

Like Loading...
‹ The Roman empress who used forensic science to identify her rival’s head
The discovery of a 5500-year-old cold case ›