Halloween Horror Post #3 (2017): The cinematic after-life of an unidentified skeleton 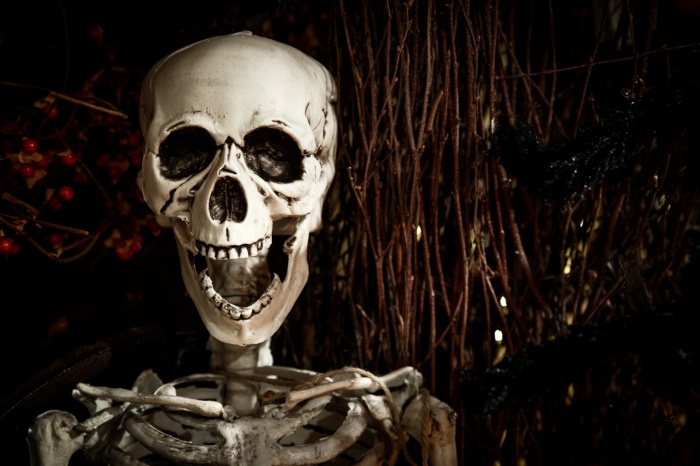 I recently read an article by John Squires, published in 2014, over at Halloween Love about how Dawn of the Dead unintentionally featured a real dead person.  Some of the movie crew rented what they probably thought was a fake skeleton from a costume shop when they filmed in Pittsburgh in 1978.  But in 1982 it was discovered that these human remains were real.  Since this story combines my two loves, bones and zombies, I had to read the original reporting on this story.
In October of 1982, a cop walked into the Scott Township, PA location of Costume World to find a Halloween costume.  This is where he saw a human skeleton displayed in a glass coffin – something really common for Halloween-centered businesses this time of year.  But this cop thought these bones looked a bit too authentic and reported his suspicions to the coroner of Allegheny County.  The coroner went to the shop the next day, agreed that the bones looked real, and confiscated the skeleton.
After an examination, the coroner reported that the human remains likely belonged to a middle-aged female of Caucasian ancestry. He also said that there were no signs of foul play.  Due to the wiring and rods holding the bones together, the coroner believed that this skeleton was once used as a anatomical specimen or teaching aid.
The police questioned the owner of Costume World, Marilynn Wick, to try and figure out how the unidentified woman’s skeleton ended up in her costume shop.  Though police weren’t able to track down the origin of the mysterious bones, much less identify the body, they were able to find out that the skeleton was used for initiation rituals at a lodge at one point.  The lodge then sold it to Larry Winterseller, owner of Maiers Costumes, around 1973.  Winterseller had the skeleton for almost ten years when he sold it to Wick, who thought it was fake, in the spring of 1982.  The bones were displayed in Wick’s store for a few days before the coroner confiscated them.
According to this timeline, crew members from Dawn of the Dead would have rented the skeleton from Maiers Costumes when they filmed the horror classic in 1978.  Weird side note: someone in the special effects department must have thought the bones needed something extra to make them look more authentic so they covered the them with a layer of dark brown latex and Rice Krispies to simulate mummified tissue.  A screen grab from the movie, featuring the shrouded skeleton, can be seen over at Halloween Love.
The bones were eventually buried at Mount Lebanon Cemetery in an unmarked grave.  The grave and service were donated by a local funeral home.
In “The incredible story of ‘Dawn Doe,’ a real skeleton seen in Dawn of the Dead,” Squires reports that in 2013 filmmaker William Sanders (Road Trip of the Dead) raised the funds, with help from Marilynn Wick, necessary to put a marker at the skeleton’s grave site.  Sanders had the headstone carved with the nickname he gave the unidentified woman, Dawn Doe.